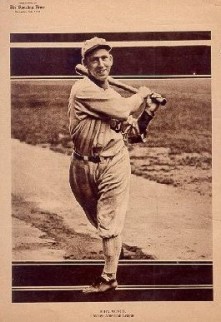 A total of nine different subsets make up the famous M101 Sporting News and Supplements series. The nine subsets are categorized as M-Cards in the Periodicals section of the American Card Catalog.

The nine sets are a mixture of both cards and large supplements issued by the Sporting News. With approximately 700 cards and supplements, the issue is a large one, to say the least.

These are sepia-style pictures with a player image on the front along with his name and team printed at the bottom. Some of the pictures are unbordered while others include some sort of rectangular frame. In addition, pictures of that year’s World Series teams are included as well.

This supplement is semi-popular with set collectors as it is not a terribly large set. With only 13 pictures, it is possible to complete, even if the supplements are not abundantly common. One hurdle to collecting the set, however, is that it includes many big names. More than half of the set includes Hall of Famers. In addition, the two team photos are desirable because they feature Hall of Famers, too.

The pictures are impressive but the photos are difficult to find in high grade. Because they were supplements, they were printed on thin paper instead of a card stock. As a result, the are easily wrinkled and torn. Often, these supplements will have tears around the edges or even more significant damage.

Babe Ruth is the obvious key to the set but photos of Rogers Hornsby and the New York Yankees are also extremely popular.

In addition to those photos, the set is also notable for producing the rookie ‘card’ of Hall of Famer Heinie Manush. These are supplements and not traditional baseball cards, of course. So some collectors wouldn’t consider this his rookie edition. However, as it is cataloged by Jefferson Burdick in his American Card Catalog, for those collectors looking for the earliest collectibles of Hall of Famers, this appears to be Manush’s.