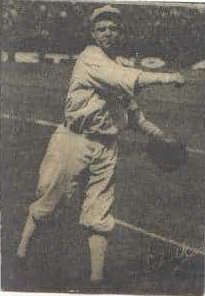 Schapira Brothers was a candy company based in New York. In the 1920s, they distributed a set of baseball cards inside their packages of candy. The exact date of production is a little fuzzy. Some reports have this as a 1921 or 1922 issue while other say it wasn’t produced until the middle part of the decade. It is generally considered an early 1920s issue, however.

The cards were a premium item found inside with the candy and featured a player’s image in black and white one one side and a blank back. The player’s replica signature was also included on the card.

Today, the cards are rare and expensive. A checklist has been developed but new cards continue to surface.

These weren’t the only cards made by the company, either. Schapira Brothers Candy also created a set of six Babe Ruth cards that were printed on the outside of their boxes in the previous year.

Here are pictures of most of the known cards. 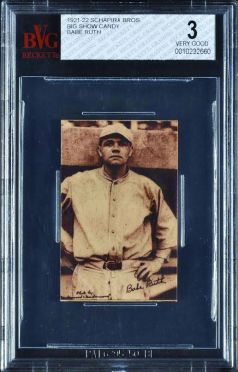 While the checklist for this issue was previously at 20, a new find in 2018 uncovered a 21st card in the iconic Babe Ruth.

The card was recently brought to Beckett and graded by Andy Broome of the company’s vintage grading service The discovery was first noted in an issue of Beckett’s Vintage Collector publication.

Ruth’s inclusion makes perfect sense given that he had his own six-card set produced by the company in the aforementioned Schapira Brothers Candy product. His card now soars to the top of the list in terms of importance in the short checklist.

The card was auctioned by Robert Edward Auctions in the spring of 2018 and drew significant interest. It ultimately sold or a whopping $42,000.