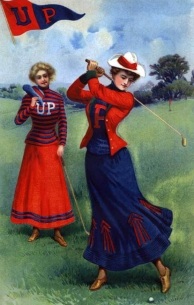 The Tetlow College Girl Series set consisted of four photos distributed with packages of Tetlow Gossamer facial powder for women. The series depicted women playing a variety of sports for different colleges. The photos were created in 1903 and distribution in the packages ended on December 31, 1904.

In all, a total of four different photos were offered featuring basketball, fencing, rowing, and golf. All four pictures were represented by various Ivy League schools.

The basketball picture is generally the most desired and some even believe it could be the first basketball card of all time. Its larger size and the fact that it depicts women’s basketball players for a Princeton team that did not exist make that case a somewhat difficult one. Many collectors place this in the category of being a photograph instead of an actual card.

Only four photos exist in the set. They are presented in the checklist below.