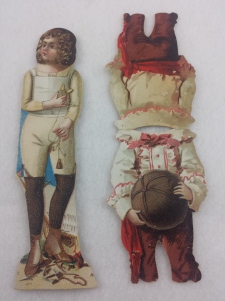 McLaughlin Coffee produced numerous paper dolls in the 1800s. These would feature a boy or girl and also various outfits that they could wear. While most of these were non-sports issues, a baseball, basketball, and boxer paper doll are known.

While often categorized as a trade card, this issue is actually a Z-Card in the American Card Catalog. Specifically, it is a Z-9 issue (among others) as it is a coffee and food insert.

The baseball doll is of an unknown boy with only baseball equipment on the floor near his feet – a baseball and a bat. Meanwhile, the basketball doll (pictured) still raises questions from some collectors today. Arguably, it may be the oldest basketball collectible known to exist. However, while it does look like a basketball he is holding, it isn’t definitive.

While these are generally classified as trade cards, it is difficult to consider them in that manner. Many paper dolls from the era are actually stated as such directly on the product. Some also fold out to stand up and really are more display pieces and collectibles than actual cards. But as 1800s items, they certainly remain sought after collectors to this day.

The set is identified as an 1894 issue by the copyrighted information on the back.

Most of McLaughlin’s paper dolls were non-sports issues. The only known major sports cards represented in this set are: