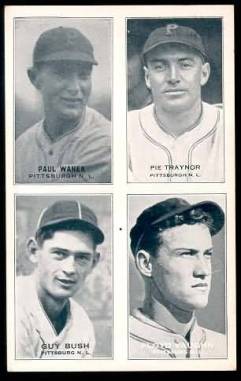 Exhibits are sometimes called postcards, although that isn’t really accurate since only some have postcard backings. Many Exhibit cards are blank-backed and some cards include a corner coupon printed on the back.

Most Exhibits look fairly nice. However, almost all of the sets have plenty of typos and misspelled names. Players were also misidentified throughout the series.

Starting in 1929, Exhibit moved to a different design to feature four players on one card. All W463 classified cards have this same design with four players to a single card. Collectors should note that many of these cards have been cut up over the years. Thus, instead of having one large card with four pictures, they were left with four smaller individual cut ‘cards.’ That has also confused many collectors unfamiliar with W463s as to the origins of these new, smaller cut cards. While there is some value for these cut outs, the fully intact four-in-one cards, of course, are worth much more.

Specifically, the 1935 Exhibit card set features cards with a blueish-gray ink color against a white background. It is often referred to as a light blue but the cards typically look more like a pure black and white. This was a change from previous years that had cards in a variety of tint colors.

Similar to the 1935 Goudey set, these cards do not merely contain random players. Instead, four players from the same team were used. Each of baseball’s 16 teams were featured on a card — this was a change from the first few years in this series when each team had two cards. All of the 1935 Exhibit cards have blank backs.

These cards included the name and team/league of the player pictured. As with past Exhibit sets, a dark ink was used when the print was over top of a lighter background and a light ink was used when the background was darker. Formatting is varied with some players having their full first/last names printed and others only having initials of their first and or middle name printed.

Many of the cards are similar to the 1934 set. Several teams replaced only a single player on a card.

Cards do not include card numbers. All of the cards have a vertical layout and the cards have two different styles of fonts for both the names and team/leagues. Some cards have the player’s name, team, and league in a larger, bolder font. Others have that print in a smaller font.

Babe Ruth with the Boston Braves

Babe Ruth’s card is again the most valuable one in the set. However, this time he is pictured with the Boston Braves instead of the New York Yankees.

That card is special as it is one of the few Ruth issues featuring him with the Braves, a team he spent only one season with. 1935 was Ruth’s final year as a major leaguer and this is one of his very last cards as an active player.

Ruth was the only new addition to the Braves card from the 1934 set. The other three players, Walter Berger, Ed Brandt, and Frank Hogan all appeared on that card. Ruth replaced Bill Urbanski on the 1935 card.

Below, I have arranged the checklist by team with the players featured on each card.