The Collector Connection’s latest auction features more than 1,000 lots of non-sports cards and comic books. And while the auction has a post-war flavor, there are still plenty of intriguing pre-war cards and collectibles.

In all, there are more than 50 pre-war card lots with several more that feature 1940s comic books. Focusing on the cards, collectors will find an intriguing mix of just about everything. Here’s a look at some of the highlights. 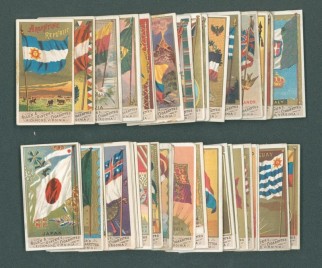 The auction catalog (which can be viewed in its entirety here) includes several complete or near complete sets of pre-war cards. A highlight here is, certainly, a nearly complete 1887 Allen & Ginter Flags set, missing only two shortprinted cards for completion. This unique 19th century set features flags of different countries from around the world. While numerous such sets were issued in the pre-war era for tobacco and candy companies alike, this set remains one of the earliest and more sought after releases.

Other complete sets from the American Tobacco Card Company are found in the auction. Among those, there are full sets of the popular 100-card 1910 T42 Bird Series as well as the 1910 T30 Arctic Scenes set.

Aviation card have gained steam in recent years and yet another complete set is a 1940-41 series of Zoom Airplane cards.

Collectors building sets will find some listings for individual cards and small lots, too.

There is a smattering of these types of listings from well-known domestic sets, including the T113 Types of Nations series, the T68 Heroes of History set, and the 1941 Gum Inc. Uncle Sam issue. There are also lots featuring cards from overseas. But some of the more sought after lots are those featuring cards from the popular 1940 Gum, Inc. Superman series.

The auction includes two separate lots of Superman cards with the featured attraction including a listing for a whopping 19 of these gems.

With the character’s comic book debut in 1938, these 1940 cards are generally considered to be ‘rookie’ issues for the famous hero. Popularity for early superhero cards such as these have soared.

The 19-card lot represents more than 1/4 of the 72-card set and it’s highlighted by a PSA 2 graded example shown here (all other cards in the collection are raw).

There are also a good number of 19th century listings to be had for individual cards and small lots. There, collectors will find more than 50 cards from the real-photograph sepia style series’ from Duke, Sweet Caporal, Hess, and others from the late 1800s.

The cards from an assortment of N-Card sets feature the top actors and actresses (primarily, actresses) of their generation. These cards have been mostly split into smaller lots consisting of two and four cards, making it easy for set collectors or those simply wanting some as type cards to be able to bid on a small amount.

Additionally, a handful of other 19th century issues are included in the auction from the likes of Allen & Ginter, Buchner, and others. A highlight there is an SGC 3 example of a card from the rare 1887 N228 Buchner Police Inspectors and Captains series.

The current auction will end this Sunday, November 6 at 10:00 p.m. followed immediately by the extended bidding period. To register to bid in the auction, click here.