Love of the Game’s (LOTG) 2022 Summer Auction is underway. With 1,400 lots, the auction heavily focuses on vintage baseball cards and memorabilia. Pre-war baseball collectibles, in fact, cover roughly half of the entire sale.

Of the pre-war lots, one stands out above the rest — a complete 520-card T206 baseball card set, missing only the Big Four rarities. While rarer cards are found in the company’s auction, anytime a complete T206 set is available for sale, it is difficult to ignore — even if it is LOTG’s third such set for sale in the past year.

Many of the set’s key cards of Hall of Famers have been graded with some shown here. In all, two dozen cards are slabbed by PSA.

If you’re after rarer pre-war baseball cards, too, you’ll find plenty to capture your interest.

Among other key cards are an 1888 N173 Old Judge cabinet card of Hall of Famer King Kelly (graded a PSA 4, for good measure). And speaking of 19th century cards, another highlight is an 1887 Oshkosh team cabinet. That cabinet is notable because, in addition to picturing deaf player Dummy Hoy, it includes Hall of Famer Frank Selee.

“Selee is a quandary for Hall of Fame collectors,” explains Al Crisafulli, owner of Love of the Game. “There’s only one card of Frank Selee – literally. The 1904 Allegheny Card Co. set is the only set in which Selee appears on a card by himself, and there’s only one known example of that card. So if you want a card of Selee issued during his career, you have to widen your focus to multi-player, team cards – and there are very few of them. This is the only example of this cabinet we have ever seen, and it pictures Selee by himself in a composite photo. It’s about as close to an individual Selee card as you’re going to get.” 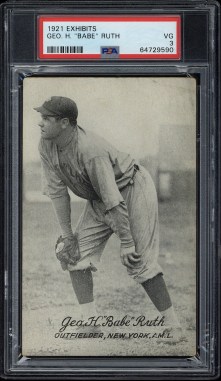 aren’t the only things featured, either. Collectors will also find photographs, tickets, and other unique items, including a collection of glass plate negatives of pictures that were used for N172 Old Judge baseball cards. Tickets include a large run of World Series stubs from each series between 1920 and 2020 (plus a few earlier tickets).

Finally, several incredible Babe Ruth items are up for grabs, too. A newly-discovered 1921 Exhibit card of Ruth (graded a PSA 3), an increasingly desirable early card of the slugger, is featured. As an aside, the Ruth is one of a gaggle of Exhibit cards available in the auction. Ruth is also featured as a rookie on a 1915 photograph from the World Series in a separate lot. A third lot includes a March 1916 Sporting Life with Ruth on his first ever cover appearance for that publication

The final date to bid is Saturday, August 20. To register for the auction and review the selection online, visit http://www.loveofthegameauctions.com. Love of the Game is also in the process of assembling its Fall, 2022 catalog auctions and “Great Cards” selections. For more information, or to consign your material, contact Love of the Game at info@loveofthegameauctions.com or (845) 750-6366.

tagged with Articles, Auctions, Love of the Game