Pre-War Gems Highlight the Latest Love of the Game Auction

Love of the Game’s 2021 Summer Auction is underway and collectors will find all sorts of pre-war baseball cards in it. In fact, the auction includes nearly 800 lots with more than half assigned to pre-war cards.

Love of the Game Auctions touts itself as an internet-based sports auction house catering to the passionate collector of cards and memorabilia,

Pre-war headlines the auction with a PSA 8 Cy Young T206 portrait card as lot No. 1. The card is already past $50,000 (including buyer’s premium) with the auction ending on August 28. That card is only one of seven with a Sweet Caporal back that has achieved that grade.

The Young isn’t the only high-grade T206 card, though. The auction also boasts a PSA 7 of Ty Cobb’s famous bat off T206 card. This weekend, that card has already topped $20,000.

There are some true rarities, too, even beyond those high-grade gems. A 1914 Christy Mathewson Cracker Jack card graded SGC 2 has already reached $30,000 in bids.

Then there’s a truly spectacular 1910 E105 Mello-Mint Honus Wagner, one of just six graded by PSA, checking in at a 2.5. Those cards are flat out difficult, regardless of the grade. The auction also features a number of tough cards of such desirable stars and Hall of Famers as Babe Ruth, Lou Gehrig, and many more. One interesting Ruth card is a 1928 Harrington’s Ice Cream card graded a spectacular PSA 5.5. 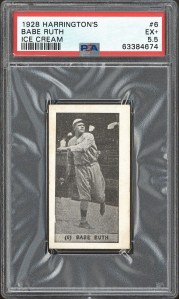 And while not technically as rare, another pre-war cornerstone in the auction is the iconic 1909-11 E90-1 American Caramel card of Shoeless Joe Jackson — his rookie card, no less. Graded an SGC 3, that card is already approaching $35,000 in bids.

19th century baseball is a focal point of the auction, too.

Of course, Old Judge Cigarettes are well represented, with N173 cabinets of Cap Anson, Buck Ewing, King Kelly and more, and N172 cards of Tim Keefe, Tommy McCarthy, and others.

Additionally, the auction features a number of high-end post-war cards, led by the most popular of all post-war vintage cards, the 1952 Topps #311 Mickey Mantle. Graded EX 5 by PSA, the card remains among the most desirable cards in the hobby, its value skyrocketing over the past year.

For the second consecutive auction, the company features a “Great Cards” pullout, which includes nearly 50 higher-value cards from all sports. “These are truly special cards,” explains Auction Director Al Crisafulli, “cards that deserve to be highlighted because of rarity, condition, or overall desirability. It’s a pleasure to feature such a fantastic assortment of cards that we can highlight some great ones in this manner. It’s a great way to spotlight a group of cards that stand apart from the rest of the auction.”

“We present these cards not as important investments,” Crisafulli explains, “although they are probably that as well – but as a curated selection of quality sports artifacts, sort of a look through hobby history at its most important cards.”

The final date to bid is Saturday, August 28. To register for the auction and review the selection online, visit http://www.loveofthegameauctions.com.

tagged with Articles, Auctions, Love of the Game