Each month, I’ll address questions here that I receive via email or Twitter. While I won’t address every question that comes in, I’ll try to cover a few and give some answers. To submit a question for the next mailbag, head over to the Twitter account or visit the About Us page for the site’s email address.

Are there blank back Allen & Ginter Champions Cards? 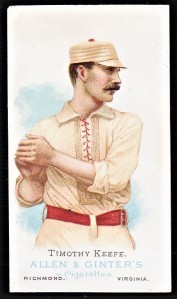 That sort of depends on your definition of the word ‘cards.’

There are a few instances when you might find cards that look like they are from the N28 or N29 Allen & Ginter’s Champions sets.

The most common blank-backed cards are cutouts of the pictures found in the A16 (N28 counterpart) and A17 (N29 counterpart) albums. In addition to the cards the company made, Allen & Ginter produced albums with pictures of all of the cards in the set. These are not technically cards, but they are essentially the same dimensions and have the same images of the actual cards in the tobacco card sets. They are printed on thinner stock, though, and are blank-backed. While they do have some value, they are not as valuable as the regular N28 and N29 cards.

There are also much rarer advertising display posters for these cards, cataloged as G20 (for the N28 cards) and G21 (for N29s). While I haven’t seen the backs of those, I suppose they could be blank-backed as well.

Finally, a blank-backed card could, of course, indicate a skinned but legitimate N28 or N29 card that had the back peeled away.

I have a question, and perhaps you can answer it. Gypsy Queen or Allen & Ginter: Which of these two brands made baseball cards first? 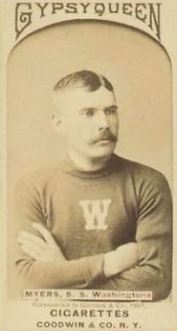 So, the short answer is probably Gypsy Queen. The long answer is a little more complicated.

Both have non-sport and/or trade cards that date to at least 1886. But in terms of baseball cards, Gypsy Queen’s popular N175 set is credited as an 1887 issue as the cards carry an 1887 copyright date on them.

For many years, Allen & Ginter’s baseball cards in the popular N28 set were believed to have been issued in 1887 as well. But the set is now generally credited as an 1888 set, thanks to the card of Hall of Famer John Clarkson. Clarkson is believed to be wearing a Boston uniform on the front but he did not join that team until 1888.

If you really want to overanalyze here, another thing to consider is the N508 Sub Rosa set. Technically, this was a baseball card set. But the cards featured women that are not believed to be real players. Sub Rosa Cigarettes is sometimes credited as an Allen & Ginter brand. But even if you assume that, the years the cards were produced is unknown. They are similar to the N48 cards, which also feature female baseball players — and those cards are often cited as 1886 cards. But now you’re really getting into murky waters.

If you’re talking about cards of actual baseball players, the Gypsy Queen cards seem to have come first.