The Missing Stars of the T207 Set

The T207 set was the third of the American Tobacco Company’s big trio of baseball card sets. While the T205 and T206 sets that preceded it are immensely popular, the T207 set has always been less attractive to many collectors.

The set has its followers — don’t get me wrong. And for the record, I’m one of them. But the set’s duller appearance is one reason it doesn’t get as much attention. The ultra tough rarities make collecting a set very difficult so that’s another reason.

Yet another? Its lack of stars.

It’s not that there are no big names found in the set. In terms of star power, Hall of Fame pitcher Walter Johnson probably leads the way. There’s an early card of Tris Speaker and rookie cards of Buck Weaver and Hall of Famer Max Carey. Numerous other Hall of Famers, such as Zack Wheat, John McGraw, Chief Bender, Frank Chance, Joe Tinker, and more are found.

But with T207, it always comes back to who’s not in the set.

An easy way to determine the biggest names not in the set is to look at the earlier T205 and T206 sets because, well, those included practically everyone of note. And when you do that, you start to realize a lot of missing players. 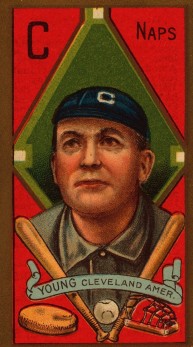 There are actually good reasons that some players not found in the set that collectors might expect to see are not present. Let’s take a look at some of those first.

For starters, Honus Wagner and Eddie Plank aren’t there. Their absences are somewhat understandable, though.

Both did appear in the massive T206 set, but it is generally believed they were included without their permission and their cards were shortprinted after being pulled early from production. No reason has ever been confirmed but it’s believed they were against being associated with cigarette cards. The two did not appear in many tobacco card releases so being absent here is not a surprise.

Some of the T205 and T206 stars that are not found are also understandable. Take, for instance, Cy Young. Some collectors wonder why Young, one of the best pitchers in baseball history, wasn’t included. But the hurler retired in 1911, the year before this set was issued. Another big name is Addie Joss. Joss appeared in T205 and T206 but died in 1911 of tuberculous meningitis. In fact, his 1911 T205 card a tribute card to his death. His absence, thus, was easily explained, too.

Wagner, Plank, Young, and Joss are all perfectly understandable omissions.

Even including those Hall of Fame omissions, the biggest absence is that of Hall of Fame Ty Cobb. Cobb is one of the most popular players of all time and, in terms of pre-war cards, he trails perhaps only Babe Ruth in terms of interest. And it is hard to make a case for his lack of a card here. Unlike Wagner and Plank, he is found in a ton of tobacco card issues and even had his own brand of tobacco.

Same goes for Christy Mathewson. Mathewson’s one of the big names that’s also missing and it’s hard to figure out why. Like Cobb, he was in the T205 and T206 sets. He was also nowhere near the end of his career when the set was released in 1912. The previous year, Mathewson led the league with a 1.99 ERA and nearly won the National League’s Most Valuable Player Award.

Those are the two big unexplainables from the T205 and T206 sets. But one player didn’t appear in either of those releases and yet, it’s hard understand why he wasn’t in this one.

Jackson broke into the majors in 1908 but he barely played in his first three seasons, splitting his time between the majors and minors. Jackson, in fact, played only 30 total major league games from 1908-10. Thus, it’s easy to see why he didn’t make it into the earlier T205 and T206 sets.

But his absence here is really a mystery, given Jackson’s 1911 season the year before these cards were issued. That year, Jackson was a full-time player with the Cleveland Naps and batted a career-high .408. It’s hard to believe but that was not even good enough to lead the league as Cobb batted .419 that year.

Jackson established himself as one of the premier players in the league and it’s hard to see why he wouldn’t have been added to the set.

One thing that I find fascinating about the set is that it had even fewer stars than you think if you look closer at the checklist and where the careers of those players stood at the time of the set’s release.

See, players like Walter Johnson and Tris Speaker became household names and they’re there. But both were very young players at the time and did not debut until 1907. Each had made some waves in the sport but they were both younger stars and not nearly as established as they would ultimately become. Few could have anticipated they would have the types of careers they did.

Look, too, at one of the other few Hall of Famers — Max Carey. Carey is a Hall of Famer but also was just beginning his career. His T207 card is actually viewed as his rookie, as I mentioned earlier. Same goes for Smoky Joe Wood, not a Hall of Famer but a star player — his career had really just begun, too. Ditto that for Buck Weaver, who has one of the most valuable cards in the set. He would become a bit of a star player but his card, like Carey’s is a rookie card. Plus, Weaver’s popularity is largely tied to the fact that he was a banned member from the infamous 1919 White Sox team. At the time, he would have been a virtual nobody. He would later become a good hitter but he batted only .224 in that rookie year.

Even in terms of other Hall of Famers, many were not megastars — the likes of Chief Bender, Home Run Baker, Rube Marquard, and Bobby Wallace, for example, were Hall of Fame players but hardly on the level of the likes of Wagner, Cobb, Mathewson, etc.

A second key point here is that the set went out of its way to feature obscure players — some of which had minimal or no major league careers. While that was the case, in particular, in the T206 set, that set was also more than twice as big. The number of obscure players used in T207 is considerable, making the dearth of stars that much more noticeable.

What does this mean? It’s really hard to say for sure. But it’s clear that the set’s creators clearly avoided the big name veterans that were found in the other sets. There could be any number of reasons for that. It was the company’s final set and perhaps it had become too costly to secure the biggest names for inclusion. Whatever the reason, even some of the biggest stars in the set as we know them today were not all that established at the time it was printed.

And that means that, when the set was created, it had even fewer star players than it appears these days.