Border Rainbow: A Look at the Varied Colored Tobacco and Candy Card Borders

It’s not much of a secret that many of the 20th century cards from the pre-war tobacco and caramel era all had a relatively similar look. Most had some sort of a color, lithographic image of a player along with his name and team at the bottom.

The majority of those cards also had white borders presenting a look that was pretty similar. Those similarities were even more evident since many of the images were reused across sets.

But while white was the standard color for borders in most sets, a few releases bucked the trend.

More sets, of course, than the ones below may have featured these same colors of borders. In general, though, I tried to focus on just a single set that included baseball players to show an example of the color being used. Only tobacco and early candy cards are covered here, so things like the 1914 Baltimore News cards, which had blue and red borders, are not counted. 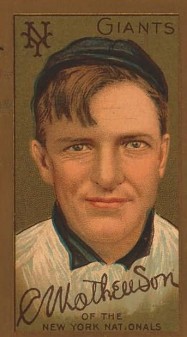 The most famous of the non-white border sets of the time period is probably the T205 gold border release.

Issued in 1911, these cards have some of the most detailed artwork you’ll find in pre-war sets National League cards, like the Christy Mathewson shown here, had a large portrait image of a player. American League cards (like the pictured card of Ty Cobb) had a smaller portrait image of players inside of a baseball diamond playing field with surrounding equipment.

The distinctive feature is, of course, the gold-colored borders surrounding the cards. That has been a bit of a two-edged sword. While the cards look incredible when they have little damage to the borders, the gold borders do little to hide even minute flaws and that makes them less presentable.

And, it should be noted that some of the cards can be found with green-colored borders, too. That is likely due to ink level discrepancies in the printing process.

The 1910 T210 Old Mill set featured minor league players from a variety of leagues. This massive set includes a total of eight series with each one covering a specific league.

Since the cards picture minor league players, many of the names are virtual unknowns. A few big names exist, though — most notably Shoeless Joe Jackson and Hall of Fame manager Casey Stengel. The Jackson is easily the key to the set and, as a six-figure card, it’s one of the most valuable baseball cards in history. Still, while the Jackson is the card everyone focuses on in this set, there’s really quite a bit more there to unwrap, as I covered in this article.

These cards had a similar layout/style with many of the white border sets. However, the fact that they included black and white pictures of players along with bright red borders easily makes them stand out.

And while almost all of the cards have red borders, a few have been known with orange and yellow borders. 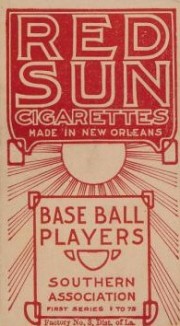 Similar to the T210 Old Mill set, many of the players in this set are relative no names as they were minor leaguers. The look of the cards is also very similar to the T210 set in that the cards have black and white images of players as opposed to the more popular color lithographic ones.

The most distinctive part of them, some would argue, is found on the back. With a red-ink advertisement for Red Sun cigarettes, these have among the more unique backs of cards that you will find.

But the fronts are important, too as they are distinguished by an olive green color of border. 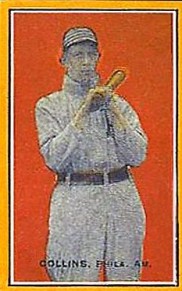 Orange borders were seen in at least a couple of uncataloged early candy sets.

While not listed in the American Card Catalog, the 1910s Baseball Bats Candy set featured cards with orange-colored borders (one is pictured here). These cards were cutouts from candy boxes and had black and white images of players inside of an orange border. It should be mentioned, however, that some Baseball Bats Candy cards had white borders and there are at least three different types of them.

Additionally, a separate uncataloged set of orange-bordered cards exists, too. This set, issued around the same time in 1910, was also printed on candy boxes. Most cards in the set featured individual players but two team cards, featuring the 1909 National League champion Pittsburgh Pirates and 1909 American League champion Detroit Tigers were included as well. Both sets of cards are somewhat rare. 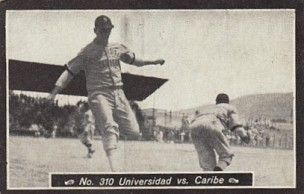 While white borders were popular here in the United States, several international sets chose a black border style of card.

One of those that included baseball is the 1917 Aguila Roja set as well as the 1930s Doble Aguila/E. Quintana sets.

As is the case with the gold borders and other colored borders, these cards easily show off even the most minor wear to the borders.