Baseball Anatomy and Pre-War Sets that Focused on Body Parts

While the designs of pre-war baseball cards varied greatly, the format for photographs on most is pretty standard. Some cards featured full or partial body poses. Others were, of course, portraits. But a select few were rather unique and pictured up close shots of different body parts.

Typically, this was done in a demonstrative to give fans and up close view of particular techniques employed by players. But, as we’ll see, that wasn’t always the case. Sometimes the focus on anatomy was random or done in a way to show exaggeration.

By no means is this an exhaustive accounting of cards honing in on baseball anatomy. But these are some of the issues that have stuck out to me as being notable.

My absolute favorite item featuring baseball anatomy is actually a poster. Because it has a designation in the American Card Catalog, though, it’s often grouped together with cards.

For many years, Baseball Magazine sold posters featuring baseball players. These posters are cataloged today as M113 and M114.

While many of these were fairly straightforward images, one featuring the arm of Hall of Fame pitcher Walter Johnson is shown. The picture was a somewhat popular one and was focused elsewhere, such as in this Getty photo. This particular one is titled, “Walter Johnson’s Pitching Arm.” Even in low-grade condition, the poster sells for a few hundred bucks and the price rises dramatically for ones in nicer shape. 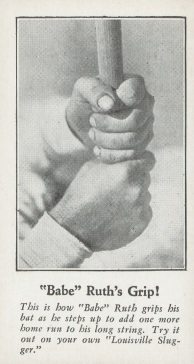 One of the more common demonstrative types of anatomy cards are those featuring hands with specific grips. For hitters, that means the way they grip a bat and for pitchers, the ball.

Photos of all kinds of player grips exist but when it comes to actual cards, the most famous pre-war issues featuring hitter grips could be a pair of cards featuring the grip of Babe Ruth. Ruth is the most iconic slugger in the history of the sport so it is no doubt why a few makers of card sets thought his was a good one to feature.

Possibly the most famous one is Ruth’s grip card from the 1928 Fro-Joy set. That set included a total of six Ruth cards that are pretty rare since each one was only offered during a single day with the purchase of a Fro-Joy ice cream cone. The grip card is the least desirable of the six Ruth cards but still very popular just because the set is so tough.

Ruth also has a grip card from the 1935 Schutter-Johnson set. That card not only shows Ruth’s particular grip but demonstrates how it is different from the choke grip that many players used. 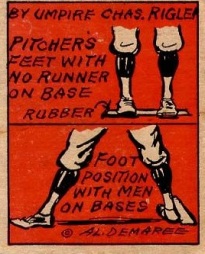 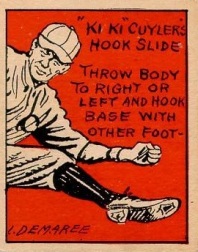 Speaking of the Schutter-Johnson set, it can be credited as one of the bigger issues featuring specific anatomy of players. In addition to the Ruth grip card, there are a slew of others.

The cards mostly demonstrate techniques of various players and some have closeups of specific body parts.

Collectors will find all kinds of pitcher grips in the set but also a few cards focusing on the legs and feet of players.

One card, for example, focuses on the feet of a pitcher when he has men on base vs. when no one is on base. At least a couple of others demonstrate sliding techniques. One shows the famous hook slide of Ben Chapman. Another, pictured here, focuses on Kiki Cuyler’s own hook slide.

Of all of the cards featuring anatomy, sets focusing on the heads of players are probably the most common.

One of the more unique sets is the E99 Bishop Floating Heads issue. These cards are truly odd with many showing only a players’ head. No shoulders, no upper body – just a head.

But when it comes to popularity, the set that most comes to mind is the 1938 Goudey ‘Big Heads’ or ‘Heads Up’ set. Those cards featured full bodies but were unique because they were caricature like in appearance with real heads attached to cartoon bodies.

Exaggerated sets focusing on the heads are also present. For example, there are the 1916-20 Big Heads strip cards. Shown here is one from the set featuring Leon Cadore.

If you look at some of these cards, you’ll notice that the ‘Big Heads’ name doesn’t seem all that applicable. More notable is the overall shape of the player bodies as they all appear to be short and stocky. Nevertheless, the set is not named on the card themselves and the Big Heads moniker has just sort of stuck.

Several sports card sets, however, do feature players with intentionally oversized heads. You’ve got the aforementioned 1938 Goudey cards, of course. And others were part of caricature sets, such as the 1928 and 1929 Churchman Men of the Moment sets from the UK. That set featured all kinds of athletes with the most notable ones being boxers, golfers, and tennis players. 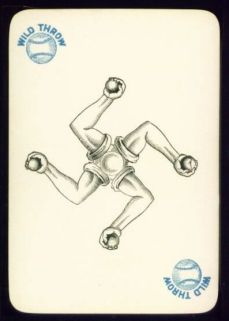 Most of the anatomy cards are related to specific players. But some were generic issues and one in particular is a real wild card — literally.

The 1884 Lawson Game card set was one of the first (if not the first) to depict actual game play. The hype surrounding this particular game was quite significant. In fact, a large promotion was created for its release that involved actual baseball players participating in a nationwide tournament.

Some of the cards in the set look a bit odd to begin with, featuring random equipment and generic subjects. But one is incredibly strange and it features a four-arm logo. Each hand on the arm is gripping a baseball and the card in question was to designate a wild pitch (or, as called on the card, a wild throw).

Of all of the pre-war baseball anatomy issues out there, this one is near the top in terms of oddity. 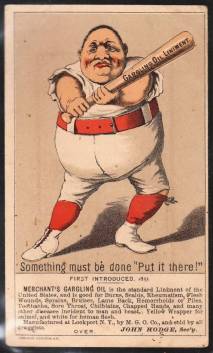 Some cards featuring athletes didn’t focus on specific individual body parts as much as they did depicting exaggerated body types. Grouped in those, of course, are caricature cards, such as the ones I mentioned earlier. But there are more, too.

One of the more common sets in this regard is the Merchants Gargling Oil trade card set that features an overweight baseball player.

In that specific case, the player’s stomach was exaggerated to make for a comical issue. But others focus on other body parts at the other end of the spectrum. Some, like the 1878 Forbes Company cards, feature some players with unusually skinny legs or arms. All kinds of sets feature similar types of cards, including the numerous trade card sets out there.

Finally, as discussed in an earlier article that I wrote here, the female figure was absolutely paraded on cigarette cards. Cards depicting females, in fact, were among the reasons why some people weren’t too keen on early tobacco cards.

Some cards depicting females were relatively toned down. But others sought to accentuate the figures of women to make the cards desirable to men. Often, these included exaggerated depictions of the female body, such as the N557 Little Rhody card (shown left). And some of the cards tied women directly to sports with them outfitted in particular uniforms, even if they were not real athletes.

Even though most of these cards featuring females depict generic women or women that are not athletes, these cards can be quite valuable. Some, such as the sepia-toned Virginia Brights cards sell for hundreds of dollars in even decent condition.