1940 Play Ball Set is King of the Nicknames

The Play Ball sets from 1939, 1940, and 1941 are, collectively, probably the most popular issues as the pre-war era ended. Goudey, which had ruled the gum card era, was dying out and Play Ball was there to pick up the slack.

One of the really cool things about the Play Ball issues is the use of nicknames in the 1940 and 1941 sets. The 1941 set has mostly the same nicknames for players that appear in both. But since the 1940 issue is more than three times as large, that’s the one that is chock full of player monikers.

Now, some of these nicknames like ‘Eddie’ and ‘Bucky’ were pretty commonplace. But others were more unique and some were downright off the wall. With all due respect to Big Poison, Little Poison, The Big Train, Wildfire, Deerfoot, Line Drive, and Stonewall Jackson, here are some of the other unique ones.

A two-time All-Star with the New York Yankees, George Selkirk’s name is not one that is unfamiliar to many pre-war collectors. He wasn’t a superstar but was a solid player.

With a career .290 batting average, Selkirk played for the Yankees for nine seasons. Offensively he put together some pretty good seasons, hitting over .300 in five of his first six years. Selkirk joined the Navy for World War II and his career was over once he returned and he went into the minor leagues as a manager.

While I did know about Selkirk, I had never known about his dubious nickname until I saw it on his 1940 Play Ball card. Twinkletoes? Seriously? Well, as SABR notes, he earned the nickname for an unusual style of running on his toes, which he says actually made him faster.

Harry ‘The Horse’ Danning was a solid major league player. The first half of his career was spent as a part-time player but he turned into a four-time All-Star while hitting .285.

While he wasn’t considered one of the best players in the game during his career, he was certainly viewed as one of the better catchers in the majors at one point. Twice, he finished in the top ten of balloting for the Most Valuable Player Award (twice more in the top 20) and from 1938-40, he strung together three consecutive seasons where he hit .300 or above.

Surprisingly, Danning was out of the sport by 30. He was one of the many players that was called into action during World War II and, by the time he returned, arthritis in his knees was so bad that he was forced to retire, as SABR recounts here.

Danning wasn’t a spectacular player but you don’t have to be to get a nickname. In his case, Danning apparently got the name from a Broadway character.

Many players have suited up for more than one team in his career. One of those guys was Bob Seeds.

Seeds played nine seasons in the majors and wound up on five different teams during that relatively short time (Indians, White Sox, Red Sox, Yankees, and Giants). He was nothing special as a player but was quite capable, which is often characteristic of players that bounce around from team to team — useful stopgaps but not so good that they become a necessity.

Another thing that made him valuable? His versatility. Seeds played at least 135 games at each outfield position and also suited up at first base and, sparingly, at third base.

Suitcase, who undoubtedly earned the nickname by traveling around so much, is one of the more unique monikers in the set.

So, you know the popular kids’ game, hot potato? It seems like it’s a nickname for baseball players, too. Pitcher Luke Hamlin achieved the nickname.

Despite playing only nine seasons in the majors, Hamlin pitched for four different teams — the Brooklyn Dodgers, Pittsburgh Pirates, Philadelphia Athletics, and Detroit Tigers. With a 73-76 career record and 3.77 ERA, Hamlin was mostly mediocre.

In 1939, he was tagged for a career-best (worst) 27 home runs. But that year was also his best season as he went 20-13 while making a league-best 36 starts. He even finished tenth in the Most Valuable Player voting that season.

About that nickname, it sounds entirely applicable. Hamlin was inducted into the Great Lansing Sports Hall of Fame and his page there says he received the nickname because of juggling the ball as he was preparing to pitch.

In terms of playing ability, Tony Lazzeri would probably be recognized as one of the better players on my list here. But, heck, his nickname might even be tops, too.

Lazzeri, of course, is a Baseball Hall of Famer. And while his numbers are a bit on the modest end for most Cooperstown inductees, he still hit a beyond respectable .292 while amassing nearly 2,000 hits in his career.

The ‘Poosh ’em Up’ nickname is one of the more convoluted ones you’ll hear. But it was one heard during Yankees games from mostly Italian fans.

Lazzeri’s first recollection of the name was as a minor league player in Salt Lake City when he heard it from am Italian fan there, according to his SABR page. The phrase itself was an encouragement for Lazzeri to get a hit or a home run.

Most of the players that appear in the 1940 and 1941 Play Ball sets have the same nicknames in each set, an exception to that is Bob Johnson.

More unique nicknames are found among players. But Johnson’s case is interesting because his nickname changed between the two releases.

In 1940, Johnson is called ‘Cherokee’ while his 1941 card calls him ‘Indian.’ Both were technically fitting as Johnson’s mother was half-Cherokee. But the reason for the name change, exactly, is unclear.

Wasn’t the only one with a name change between the 1940 and 1941 Play Ball sets, though I don’t know if any are as extreme as Johnson’s. In the 1940 set, Roy Weatherly was named “Stormy Weather” Weatherly on his card. His 1941 card, however, only calls him Stormy Weatherly. 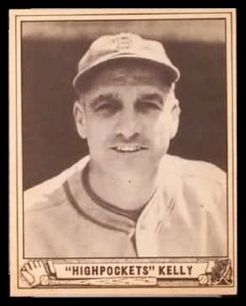 Along with Lazzeri, George Kelly is also a Baseball Hall of Famer.

Kelly was part of a baseball family and Baseball-Reference notes that three of his relatives also played in the majors. With a career .297 batting average, he was certainly a good player. But like Lazzeri, his overall credentials definitely don’t stack up with your typical Hall of Famer.

Kelly also had a pretty unique nickname in High Pockets. He was sometimes also called Long George but High Pockets is the name that most attribute to him.

Like the name Long George, the High Pockets name probably was established due to his height. Standing at 6’4′, he was generally one of the taller players on his teams. Tall guy, long pants with pockets that would have been high.

Not as interesting of an origin as I had hoped to find but still a different name.

For many of us, we automatically think of the Bad News Bears when hearing this phrase in a baseball context. But before that great movie, the nickname was given to at least two players, including Odell Hale.

Hale had a solid ten-year career, playing primarily with the Cleveland Indians. His .289 career batting average was pretty good and he had three consecutive seasons as a .300 hitter.

Hale had several nicknames but Bad News is the most interesting one. He was said to have picked up the nickname while playing in the minor leagues where he was deemed to be ‘bad news’ for pitchers. Specifically, SABR notes that he was said to have hit home runs on five consecutive days on one occasion.

He didn’t have quite the reputation as a power hitter in the majors but with that kind of production in a minor league stint, it’s easy to see where the name came from.

Finally, it’d be impossible to mention interesting nicknames on this list without mentioning the iconic Shoeless Joe Jackson.

Unlike some of the other players here, almost all pre-war collectors will be familiar with Shoeless Joe — both as a player and as a nickname. Jackson, of course, was one of the eight banned players from the Chicago White Sox team that were implicated in a gambling fix. He is regarded as one of the greatest hitters of all time, batting an unreal .356 over his career, which ranks third all time behind only Ty Cobb (.366) and Rogers Hornsby (.359).

Joe’s career had long since ended by the time the 1940 Play Ball set came about. But like other legends, he was given a post-career card in the set. In Jackson’s case, his is generally considered as the most expensive card in the entire release. Even in low-grade condition, the card usually is near the $1,000 mark.

So where did the name come from? Jackson’s nickname was apparently given to him by a journalist before his major league days as he had once played a minor league game without shoes since the ones he had were not yet broken in.