Reprints and fakes shouldn’t be viewed as the same

As I’ve covered in the past, pre-war card collecting can be done inexpensively. Now, you shouldn’t expect to get things like Honus Wagner and Ty Cobb caramel cards at low prices, regardless of what condition they’re in. But collectors can also build up a very nice pre-war collection without spending the moon for it.

But sometimes collectors want to get their hands on iconic pre-war cards that cannot be found at low prices. What’s a collector to do, after all, if they want a T206 Honus Wagner that costs more than their house? Fortunately, that’s where reprints have bridged the gap.

Now, I don’t personally collect reprints but I can completely understand why they are appealing. One really cool thing some collectors do with reprints is to start with a complete set of them in a binder and then replace the reprints with authentic ones as they get them. That’s a great way to build a set as it helps you at least get an idea of what the cards look like.

However, reprints are undeniably different from fakes. The problem is that many collectors often lump them together and give legitimate reprints a bad rap.

While often confused, the difference between reprints and fakes is easy to understand.

Reprints (or reproductions) are fully authorized cards where permission was granted to recreate them. Often, the intent is not to make them look exactly like the originals. While the pictures are the same, most folks creating reprints will go out of their way to not confuse them with the original. Some might have a glossy finish instead of a non-glossy one. Others may have slightly oversized borders. The best ones, in my opinion, have the word ‘Reprint’ expressly printed onto them.

A common reprint company is Dover and here is one of the reprints of the famous Eddie Plank T206 card. Dover does a good job of providing collectors with nice cards while easily making it known they are not the real thing. These cards, for example, were printed with oversized borders and perforated edges. Sure, a forger can trim the card, removing both of those issues. However, the card still has a clearly fuzzy picture compared to the originals, and the back is printed in black and white (Piedmont backs have blue ink). Additionally, the words, ‘A Dover Reprint’ are added to erase all doubt. Regardless of what alterations are made by a scammer, this is a very difficult card to pass off as an original to anyone even remotely familiar with T206 cards.

Card companies or those holding their rights will grant permission for these types of reprinted cards for a variety of reasons. Typically, they’ll get some kind of financial benefit. Also, by reprinting once expensive cards, this allows more collectors the chance to obtain copies of them. Finally, it’s a great way to help collectors remember a particularly important set. Typically, reprints were distributed through special sets or offers. More recently, though, card companies are reprinting cards for other purposes, such as pack inserts. 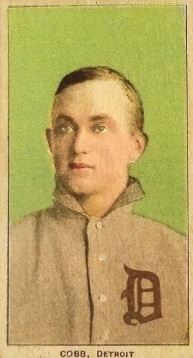 Fakes, on the other hand, are different. These are cards where no such permission to reprint them was given. And, while not always the case, they are usually printed to dupe collectors into believing they are real.

In those cases, of course, they will not have the word ‘reprint’ on them. As seen here with this fake Ty Cobb card, they will also be created to look as close to the original as humanly possible. Often, that is not easy. But sometimes, particularly with low-grade cards such as strip cards, it can be difficult to tell the difference.

Because fakes are printed without any sort of permission, they are being made illegally. The degree to which someone can find themselves in trouble depends on a great number of things. But these cards are stealing someone’s (usually) copyrighted design and, in the case of cards featuring real players, using player images or likenesses without their consent.

While almost all of us can agree that fakes are never okay, collector reactions about reprints are decidedly mixed. Some love collecting reprints and can’t get enough of them. Others believe that by placing these types of cards into the marketplace, they can be altered by forgers to give the impression they are real.

I see both sides of that. Personally, I’m okay with reprints. They’re not necessarily for me but I’d rather have licensed, authorized reprints than fakes. And if you remove reprints entirely, I’d argue that will create even more fakes to appease collectors who are merely seeking licensed reprints. Make no mistake about it, fakes will exist regardless. But licensed reprints might help curb the number of those that are made. Plus, I just happen to think collectors should be able to have the cards they want, even if they are merely copies.

What I’d suggest is that all reprints be made to clearly distinguish themselves from the original. Maybe that means stamping the word ‘Reprint’ on the back. Maybe it means a different back entirely. Maybe it means making the cards with an obviously grainy image or with a large amount of gloss on them. Whatever the case, reprints should always be able to spot a mile away.

Keep the reprints, ditch the fakes.