Which Legendary Player is Collected More?

Two of the most popular baseball players in the history of the sport arguably lead the way when it comes to pre-war baseball cards — Ty Cobb and Babe Ruth.

Plenty others are abundantly popular. Hurlers Christy Mathewson, Cy Young, and Walter Johnson are all heavily collected. Shoeless Joe Jackson is a cult hero, despite not having very many cards by comparison. Honus Wagner items are desirable, in part because he has the most famous baseball card of all time, the T206 Wagner. Lou Gehrig and Joe DiMaggio are there, too, as are many other very big names. At the pinnacle, though, are probably Ruth and Cobb.

Ruth and Cobb. Or is it Cobb and Ruth? Both are highly desired but when it comes to pre-war card collecting, which is the bigger fish? Ruth’s popularity as a player is unquestioned. But who is the one that is more pursued by card collectors?

Note that, I’m not referring to value here. Ruth’s 1914 Baltimore News minor league card and his M101 Sporting News/Mendelsohn (his established professional rookie cards) issues are some of the most expensive cards in the world and, pound for pound, blow things like T206 Cobbs out of the water. Similarly, the rare Ty Cobb tobacco branded card does equally ugly things to 1933 Ruth beaters. Rather, I’m talking purely about who collectors are pursuing the most.

The Case for Ruth 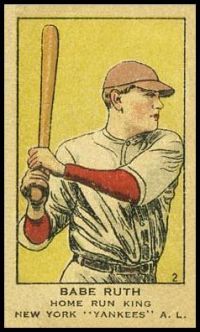 I thought of the question the other day when I was looking at the final prices in the recently-closed REA auction. As I mentioned there, five of the top ten highest-priced collectibles belonged to Ruth. Some of those items were memorabilia but two of them were cards that sold for more than $100,000 grand a piece.

Ruth is no doubt the most popular player of all time. That cannot be disputed, even by the most ardent Cobb fans. His name is known by even non-sports fans and many regard him as the best player in history. That obviously translates to the card collecting arena to some degree. Many collectors see a Ruth card as their Holy Grail.

If you’re collecting gum cards, Ruth is probably your focal point. Similar to how Cobb stars in the T206 set, Ruth is found four times in the 1933 Goudey issue. He’s littered all over Goudey sets, in fact, and Ruth sort of crosses over into the earlier era with cards starting in the World War I era. But he ruled the 1920s cards as a transition in candy cards was happening and also dominated the 1930s, even with his career winding down. Ruth was on candy bars, in movie theaters, and generally everywhere.

As a result, his cards always have generally been collected and some distributors even found ways of increasing the likelihood that his cards would be found because he was so popular and an easy sale. The Kashin Publications cards were an example of this as a Ruth card was boxed in with every pack of 25 cards that they sold.

Many Ruth cards are affordable but his 1933 Goudey issues are probably the most popular. That’s because those cards are seen in relative abundance compared to many other pre-war cards. One in particular was even double-printed and, similar to things like the 1952 Topps Mickey Mantle card, there is no real shortage of them – especially because four of them are in the set. His more expensive stuff always draws interest, too, and the top notch stuff typically is the top draw in most auctions not involving a Wagner T206.

In short, Babe Ruth cards are extremely popular among collectors.

The Case for Cobb

Cobb didn’t dominate the top of the REA auction like Ruth did but he also had a good showing with many cards in the Top 50 items. One of those was the famous T206-like Ty Cobb tobacco card with the Cobb tobacco brand advertisement on the back. That was one of six $100,000 items in the auction and is one of the most popular pre-war cards on the planet.

Cobb was really the anti-Ruth, in a way. Ruth was the cash cow even though he did plenty of living it up off the field. He had his own candy bar and was the poster child for the sport as it grew in the 1920s. Cobb was sometimes seen as a dirty player that was aggressive and not always pictured in the greatest light. If you’re a wrestling fan, he was C.M. Punk to Ruth’s John Cena. As a result, he has a lot of fans and collectors chasing his cards.

Cobb was the earlier player and shows up in all of the foremost caramel and tobacco card sets. You’ll see him in some gum issues, like the 1933 Goudey Sport Kings set, but those are mostly post-career cards as his career ended in 1928. He’s in the T206 set four times. He’s in T205. He’s in the American Caramel and Philadelphia Caramel issues, including others. Look for the biggest caramel and tobacco card sets and, chances are, Cobb’s card will not only be in them but will be the most expensive one. And, like Ruth, you’ll find him in the later candy and strip sets of the late 1910s and into the 1920s as their careers overlapped a bit.

The argument for Cobb being more collected is fundamentally made by referencing his most popular issues, such as the four T206 cards. Cobb T206s are swapped so commonly that you can’t help but see them for sale. Lots of collectors want many of his cards but the T206 issues are the ones most commonly chased by the largest number of collectors.

As I’ve written before, T206 is the most popular set of all time and at least part of that is because of its relative availability. The Honus Wagner is the most popular card but that card isn’t a realistic possibility for 99.9% of the collecting world. The same can be said, to a lesser degree, for the other shortprinted cards in the Big Four.

When it comes to attainable cards for many collectors, it starts and ends with the Cobbs, including the green background issue, which is one of the hottest cards around right now.

So what do I think? Without doing more research, I find it to be a tough call. But if I picked one, I’d probably give an edge to Ruth.

Cobb may be more collected by pre-war card collectors because a lot of those folks gravitate towards the older stuff where Ruth simply isn’t found. Tobacco cards are huge right now and there’s no bigger tobacco card name than Cobb.

But there are also plenty of post-war vintage and modern collectors only dabbling in pre-war cards and many of those collectors, I suspect, would opt for things like a 1933 Goudey Ruth card over a Ty Cobb issue. Cobb, I believe, is more popular with pre-war collectors than he is with other collectors not focusing on pre-war cards. There, I think Ruth is king, and if we’re looking for an aggregate of what all collectors are doing, I think Ruth cards are chased more than Cobbs.

As I wrote this article, I couldn’t help but think of this younger guy who was dropping off a Ruth 1933 Goudey card for grading at a local card show I attended earlier this year. Entirely unprompted and as I was completing my submission form for a dozen or so cards, he leaned over to me, happily showed me a recently-purchased Ruth and declared that was his rookie. The card, obviously, is not Ruth’s rookie issue or even close to it. But the joy on his face showing off the card he had just picked up was uncontrollable. Given his declaration of the Ruth card as a rookie issue, I can only guess that he wasn’t a pre-war collector. But to him, and many, I imagine, Ruth seems like the pinnacle.

For what it’s worth, and as an informal barometer after I came to my conclusion, I thought I’d test it out against the eBay waters. Using eBay to determine something like this isn’t ideal but I was more curious than anything to what it might reveal. I searched for Cobb cards and then searched for Ruth cards, checking for cards only in their Pre-War era, which they deem as 1942 and earlier. After accounting for things like reprints and garbage, there seemed to be about 40% more Ruth cards available than Cobb cards, which probably just reinforced what I initially thought.

Finally, I think Ruth is the pick just in terms of overall cards he has available. PSA’s master set registry shows about 170 cards purely from his playing years. Cobb’s, conversely, shows about 130. And while I didn’t look much at the lists, I imagine that Ruth’s stuff is probably more plentiful simply because it’s a little more recent and easier to find than things like early caramel cards, which are generally tough.

Cobb cards are no doubt very popular among pre-war card enthusiasts. But in terms of overall collectability among the larger, overall group of collectors, I think they still fall short of Ruth issues.