These Days, the Boxing Market is not a Particularly Strong One 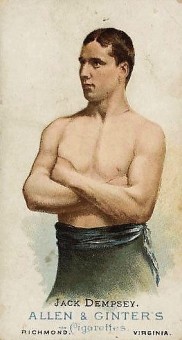 If you dabble in the pre-war boxing market, you know that prices are, for the most part, not overwhelmingly high. I don’t collect a ton of boxing. I’ve got a few hundred cards but am not an overly active buyer in those circles or anything.

But some recent purchases of boxing cards have sort of gotten me a bit more motivated. Many of the cards are gorgeous and there is also an abundance of issues. For one thing, I’ve completed a T218 Champions set (and 2/3 of a second one), which is, I don’t know, roughly 1/3 boxing with around 60 cards. I also made several recent purchases from other solely boxing sets and the one thing that’s easy to see is that prices are not as much as you might think they would be.

Take the T218 Champions set, for example. It’s a multi-sport set headlined by boxers and track and field stars. Boxing legend Jack Johnson is the key to the set and he has two cards. To date, PSA has graded only about 500 total between both cards. Not super rare but not overly plentiful, either. In really low-grade, you can find them starting around $15-$20. Prices for high-grade cards are much more expensive, obviously. But compare that to something like the 1933 Goudey baseball card set. $15-$20 won’t go far at all and get you maybe a pair of low-grade commons.

That isn’t to suggest, of course, that all boxing cards are on the cheap. Some boxing issues still easily sell for hundreds and even thousands of dollars. And, of course, there are much rarer boxing issues to be had than the ones found in the T218 set. One of these sets is what actually prompted this post.

A Case Study of Sorts

Recently, I completed the 1912 Cohen Weehen boxing set. Typically, this wouldn’t be a set I would have pursued. But I bought a small lot from a friend at a very low price. Because of that and the fact there are only 25 cards in the set (minus all of the back variations), I figured completing it wouldn’t be terribly difficult at a low price.

The cards were ultimately not too expensive. Many low-grade commons were about $10 or even a little less. And the two most valuable cards, those for Jack Johnson, were both under $100 for me.

But finding several of the cards was not easy as they are quite rare here in the U.S. Here’s the thing. The Cohen Weenen, like many other pre-war boxing issues, are rare. To date, PSA has not even graded 400 of them in all. That’s not only across all 25 cards in the set but across all of the variations (three exist – green ink, black ink, and anonymous sponsor). In other words, pretty tough set.

Some of that is probably offset because of the fragile nature of the cards. They are thin and easily damaged, which has probably led to collectors sending fewer in for grading. But they are rare, without question. That is evident by their availability on eBay where, currently, fewer than 20 are available for sale.

If this was a rare tobacco baseball card set, the cards would likely be over $100 each. So what gives?

A Sport in a Tailspin

So, boxing isn’t baseball. Nothing is baseball, in terms of cards, anyway. Even pre-war card collecting in other mainstream sports such as football and hockey, generally pales in comparison. But should the cards be so obscenely low if they’re this rare?

The problem with boxing cards is that, not only is the sport not baseball, but it’s also not even close to any of the other American sports leaders. In terms of relevance and popularity, it is woefully behind baseball, basketball, and football, and is probably significantly behind even something like hockey. It’s also been passed up by professional wrestling, which is among the more popular sports/entertainment entities, whatever you wish to call it. Boxing is very far down the proverbial totem pole in terms of American sports and really nowhere near the heavy hitters.

Things, of course, weren’t always that way. There was a time when boxing was one of the most (if not the absolute most) popular sports in the country. Forget the country, it was extremely popular around the globe with top fighters hailing from many different areas of the world.

One interesting example of this from a card collecting standpoint is the 1920s Fro Joy cards. Everyone knows about the 1928 Babe Ruth cards. They’re worth hundreds of dollars in even modest condition and widely collected. But what many don’t know is that before the Ruth cards, Fro Joy actually created a set of boxing star Gene Tunney a year earlier. Tunney, not the Babe, had top billing here. There are all kinds of tobacco and candy boxing sets in the pre-war era and the sport was wildly popular as evidenced, in part, by the large number of those you can find both domestically and internationally.

We can argue all day about reasons why the sport is not as popular these days and many could certainly debate that point better than myself. But that’s of little importance here. The issue is that the sport, for whatever reason, is well behind others in today’s landscape. And, as a result, while collecting of sports cards is very popular, collecting of boxing cards is far less desirable. From that point on, you’ve got a very simple supply/demand example. Even though many of the cards are not plentiful, if people don’t care about them, the value isn’t ultimately that high.

Conversely, consider something like T206 baseball cards. With a quarter of a million graded cards (just by PSA alone), you might not expect values to be all that strong. But the demand for the set is such that prices are not only good but they are at record levels. This despite things like new finds of them sometimes on rare occasions yielding a few hundred at once.

All of that said, can boxing cards increase dramatically in value? Sure. Card collecting comes and goes in cycles. I do think, however, that the boxing cards have their work cut out for them.

Boxing collectors that remember the sport thriving are getting older. And even though the sport isn’t anywhere near dead, it’s still got a long way to get back onto the radar of collectors. But I’d argue that something like one truly dominant heavyweight would go a long way to getting things turned around.

No, one boxer isn’t going to suddenly force a drastic increase in the values of pre-war boxing issues. But people need to care about the sport again and that would be a start. Other sports have had lulls in their history lacking tangible, marketable, honest-to-God superstars. Boxing’s issue is beyond that in people just don’t care about the sport as much in general. But that would be helped along by more marketable heavyweights. Many collectors, I imagine, could not even name the heavyweight champions the sport has had since, I don’t know, Wladimir Klitschko? When was the heavyweight class really followed broadly? 15-20 years ago with the likes of Lennox Lewis and Evander Holyfield? I have little doubt that such a long time out of the spotlight as contributed to the lack of popularity of boxing cards.

Fighters today, of course, are not found on pre-war cards. But the reason pre-war cards continue to be collected is that collectors, as they age, gravitate towards the older cards in a genre they are already collecting. If no one is watching the sport and collecting newer boxing cards, what are the odds of them jumping right in and collecting old boxing cards of guys they’d never heard of?

It should be noted that the boxing industry doesn’t necessarily correlate to how well the sport is doing these days, either. Cards have seen better prices in recent years even while the sport was somewhat on life support. Similarly, some would point to the overall popularity of football over baseball and suggest (correctly) that football cards aren’t as big of a deal. All of that is true. But I would also argue that the more years go by where the sport is continually irrelevant, it can be a snowball effect where the hobby is harmed more and more.

I hope the boxing market gets stronger again. And even if you don’t collect boxing cards yourself, you should, too. The more any sports cards are collected, the better it is for the hobby as a whole. The sports card collecting tent should be as large as humanly possible because when more people are collecting, everyone benefits.