Eddie Grant is among the more popular pre-war players that are collected despite the fact that he wasn’t a star. Grant played in the majors with the Cleveland Naps, Philadelphia Phillies, Cincinnati Reds, and New York Giants over a 10-year career, so he hung around quite a bit. A solid player, Grant never was really a star with a career .249 batting average, though.

But shortly after retiring, Grant became an active participant in World War I, serving as a captain. He was one of the few players killed in duty in that war and, because of that, is widely collected more than other common players of the era. He remains a popular topic of discussion among pre-war collectors around Memorial Day and Veterans Day.

According to the Trading Card Database, Grant’s rookie card is considered to be his 1909-11 E90-1 American Caramel card. 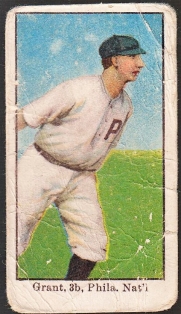 The card (pictured here) features Grant as a member of the Philadelphia Phillies. He played there from 1907 through 1910 but they weren’t his first team as he played for Cleveland earlier, appearing in only two games in 1905.

Another early card for Grant is his M116 1910-11 Sporting Life card printed around the same time. Interestingly, Grant was also featured on the cover of a 1908 Sporting Life publication. The same image on that publication was the same portrait pose used on his card. But his E90-1 is considered to be his first trading card.

The Grant card, thankfully for collectors, is not one of the harder, shortprinted cards in the E90-1 set. With approximately 50 cards graded by PSA, it’s actually one of the more plentiful cards in the release. Still, it’s not abundantly common, either, and is harder to find than some.

Even in low-grade condition, it’s usually going to cost you about $25-$30.

One of Grant’s more unique cards is his 1911 T210 Mecca Double Folders card (featured left). These cards, as I recently demonstrated, featured two players, one on each side, and were unique because they included player statistics. Grant is featured on this card as a member of the Cincinnati Reds, his third team, along with teammate Larry McLean.

Speaking of unique cards, Grant has a few others as well that are American Card Catalog issues but not really ‘cards.’ One is the 1914 B18 Blankets issue. These were cloth squares that were inserted into tobacco products and people often sewed them together to make blankets or other types of products.

Another one would be his 1909-10 S74 baseball silk. These are generally harder to find than cards and were, as their name indicates, small silks featuring baseball players. They were interesting because they featured pictures of players’ T205 cards on them. 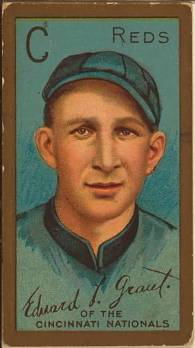 Arguably, Grant’s most popular card among collectors might be that T205 card. The T205 gold border set is a heavily-desired one and Grant is featured in it as a member of the Reds.

Grant’s T205 card is special, too, because he was left out of the larger T206 set and also didn’t make it into the 1912 T207 issue, despite the fact that he was still an active player. It’s one of Grant’s few tobacco cards and also the only one in the American Tobacco Company’s T205, T206, and T207 run.

In addition to his T205 card, you’ll also find that same picture utilized on his aforementioned S74 silk and also his T202 Hassan Triple Folders card as those featured pictures of T205 cards as the end panels.

Grant finished his career after playing the 1915 season with the Giants. He was still playing regularly, but his numbers had dipped dramatically. He hadn’t hit a home run since 1912 and batted only .208 after hitting a career-high .277 in 1914.