A while back, I wrote about the difficulty in completing the E91 American Caramel set. While that issue is indeed significantly harder than knocking out the more popular 1909-11 E90-1 American Caramel issue, there are lots of challenges with this set, too.

I started an E90-1 set maybe about two years ago initially. After selling and trading off some pieces to acquire other cards, I got back into the mix a few months ago. Taking a closer look at the set than I had previously, it’s easy to see there are all sorts of hazards here.

If you’re one of those folks that absolutely has to have every single card before you consider it ‘done’, the bad news is that this set has a whopper in the Joe Jackson rookie card.

The Jackson card isn’t terribly difficult to find, mind you. It’s routinely featured in auctions and population reports show that more than 150 have been graded. It’s out there and available. The problem here is, well, money.

This definitely isn’t one of the tough shortprints and one could even say that, based on that, it’s overvalued. But rarity alone does not dictate price, of course, and the card does not come cheap. In general, it’s difficult to get one much under $10,000 these days. Some low-grade examples do exist but price quickly escalates once you decide you want anything more than a beater.

This is, by far, the most expensive piece of the set. But even if you can live without the card, there are still some other things in your way here.

It’s certainly true that the E90-1 American Caramel cards are among the more common caramel cards out there. But that doesn’t mean they’re plentiful.

As I covered last month, the cards are much rarer than the most common tobacco sets, like T205 and, to a bigger degree, T206. Now, you can generally find about 400-500 on eBay at any given time and at most vintage shows, you’ll usually see them as well. But in general, your options are going to be much more limited than they will be for some tobacco cards.

You’ll have some choices on some of the easier cards. But don’t expect to log onto eBay and have your pick of a dozen or so of the same cards. That will hardly ever happen, even in the most common instances.

While even the easiest commons in the set are not terribly plentiful, the set takes things to an entirely different level with the many shortprints in the set.

It remains a mystery exactly which cards were technically shortprinted. Collectors have likely been bickering over this for decades but that really doesn’t matter. Just know that many cards in the set are difficult to get your hands on.

In attempting to build this set, I’ve found that you can get to the halfway point relatively easily. After that, things get tougher as your options dry up considerably. Often, you’ll find yourself overpaying a little if you want to make real progress towards completing the set in a reasonable amount of time.

Wait, half the set is tougher? That seems like an awfully lot of difficult cards, right? Yep, and the population reports confirm that. Eyeballing them, you can see about half of the set has cards with significantly lower numbers than the others.

Many of these tougher cards can be found on places like eBay but your options will generally be limited – if they exist at all. Even if they are there, oftentimes, you may see only a single copy available.

While many of the apparent shortprints feature lesser known players, the Honus Wagner throwing variation is one of them and is tough to find much under $2,000, even in lesser condition.

Along those lines, a new rarity has been added to the checklist – a Dots Miller sunset version. The variation is puzzling. 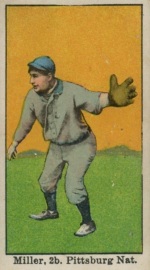 The pose of Miller is found in several other sets and always includes a red streak in the background (albeit, to varying degrees of intensity) against a yellow sky, serving as a sunset. However, most of his E90-1 cards are missing the red.

This finding was first believed to be reported on Net54 back in 2012.

The card is now recognized as a completely new card in the set, expanding the checklist to 121. Beckett was the first to grade these cards and it remains to be seen how many are truly out there since the variation is not widely known.

To date, only two graded copies specifically mentioning the variation are out there (one from Beckett and one from SGC). However, you can be assured that several others exist that do not note the variation. And, of course, raw examples exist.

However, this is another tough card in the set. The card does not sell for crazy amounts but as it gains more notoriety, the price is bound to increase.

Wait, low prices? How did that sneak in there? Well, believe it or not, low prices for this set can actually contribute a little to making it tougher.

In a nutshell, the market for these cards was much stronger five and ten years ago. While the Jackson has certainly increased in value, other cards have fallen a bit. And commons in the set do not generally sell for too much more than commons in less common tobacco issues.

The cards don’t seem to have the same popularity as tobacco issues right now and, as a result, you can now get some tougher cards cheaper today than you could in the past. This is something you also see with the shortprinted Broadleaf/Cycle cards in the T207 set as well. Demand is a bit lower, which has driven down prices.

As a result, there are certainly some people out there that are reluctant to sell, not wanting to take a loss on cards they paid more for. How many cards are being shelved right now is anybody’s guess. But I figure that some people are holding onto them in the hopes that values increase again, which they likely will, in my opinion.

So, while the cards are less expensive, that also probably contributes a little to the availability of them to some degree.