Jefferson Burdick classified the 1930s Seal Craft Discs as M30 and R123. The reason for the separate classifications was because some were distributed in newspapers and others were associated with a gum issue (Dietz Gum). In all, there are three known M30 and R123 sets, as discussed here in our database.

However, some collectors feel a fourth set belongs – the R79 Leader Discs. 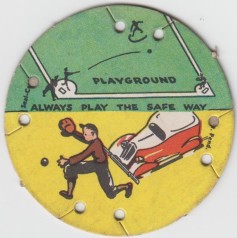 To understand where the R79 Leader Discs fit, we first have to understand the M30/R123 sets to which they are being compared. In a nutshell, these Seal Craft cards were discs featuring colorful pictures of any number of topics. But the images on them were only part of the picture.

A total of three Seal Craft sets exist and they are classified as both M30 and R123. The baseball disc shown here is the only sports-related card in the mostly non-sports set. Each disc measured a shade under 2 1/4″ in diameter and, while an exact date is not known, they are generally referred to as a 1930s issue. While they were a form of trading card, the real allure with the discs was that they were to be used for arts and crafts projects of a sort.

Each disc had holes in them along with slits that extended to each hole. On their own, they look a little odd. But this ad summed up pretty well how they worked. Essentially, they were created to connect to more of them to make bigger items. Think Legos. The slits leading to the holes allowed children to slide rubber bands into them. Once a rubber band was inserted into a disc, it could be connected to another disc. Then another.

When enough discs were added, children could make all sorts of items such as belts, aprons, etc. 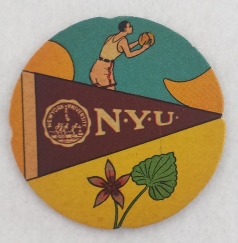 The R79 Leader Discs are often cited as a fourth Seal Craft Disc or as a possible R123 issue. That’s because the discs are remarkably similar. These are the same size and have the same general idea as they are a round disc card. Similarly, they featured a variety of topics just like the Seal Craft discs did.

If you ever see the cards, they immediately stand out as a Seal Craft type of set. Even Jefferson Burdick noted this as he called them similar to Seal Craft discs in his American Card Catalog. Burdick says these were distributed by Leader Gum but if you try to search the internet for Leader Gum, you mostly come up empty. This has led some collectors to challenge this labeling.

Like the Seal Craft discs, we don’t know exactly when these were printed for sure. However, they are often generally described as a 1930s issue.

If you’re of the belief that the R79 Leader Discs are Seal Craft issues, well, you’re not alone. There are plenty of reasons to lump the R79 issue with the M30/R123 discs.

For one thing, all of the R79 topics (Native Americans, Flags, Insignias, and Colleges/Universities) were topics included in the M30/R123 series. The M30/R123 Seal Craft discs included a few other topics, such as animals. However, every R79 subset was covered in the Seal Craft sets.

In addition to the same topics being featured in each issue, some of the same exact subjects were included, too. For example, several of the Native Americans in the R79 series are also found in the M30/R123 set.

Aesthetically, the discs all have the same general look across the R79 and M30/R123 sets – color picture on the front with a black and white back. It should also be noted that while the text on the backs aren’t exactly the same in the sets, the layout is practically identical. Both backs have cartoon imagery at the top and bottom with a short, fully-justified sentence in the middle. It is hard to not look at each of these issues from a graphic standpoint and not conclude that they are the same.

And finally, of course, both are from the same time period and classified as 1930s sets.

While the issues look virtually the same, there are some differences here that likely led to Burdick’s separate classification for the R79 cards.

The biggest difference is that the R79 discs do not have the holes and slits to be linked together as the Seal Craft cards did. Instead, they have small notches cut out of them on four sides. The exact reason for that is unknown.

Additionally, the R79 cards did not possess the Seal Craft logo found on the other cards. This is a significant problem for me when trying to make the case that they all belong lumped together.

Finally, the colleges and universities subsets are completely different. in the M30/R123 Seal Craft cards, those discs include only names of the schools and their seals. The R79 colleges/universities cards all feature athletes with pennants and mascots or logos. They are decidedly sports cards while the M30/R123 cards are not.

The problem for me stems from the fact that the M30/R123 discs were clearly Seal Craft issues while these were not. Those two sets are grouped together because they are all Seal Craft discs. That is evident from the Seal Craft logo that appears on all of the backs across the three sets. They also have the holes for the Seal Craft projects while these do not. The R79 cards don’t have those and, to me, that makes these a different issue.

So how can they be different but so similar? Pretty easy, actually. Other card issues did the same thing, after all. Look, for example, at the 1930s Goudey and World Wide Gum cards. They had the same design and even utilized the same pictures but they are markedly different sets since they were distributed by different companies in different countries. Sharing designs and images was also common in early caramel/candy card issues. Leader Gum (or whoever produced the R79 discs) could have easily been enamored with the Seal Craft disc design and simply negotiated a deal to use the concept and layout.

While very similar, I think ultimately these are still different sets and believe that Burdick was correct in not considering R79 discs as an R123 or Seal Craft issue. 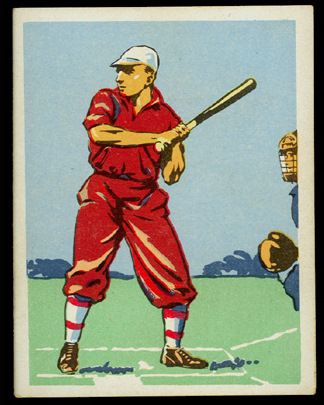