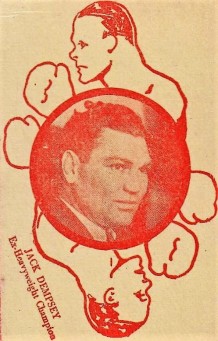 A total of two different W560 sets exist. One set features 64 cards printed only in either red or black ink. The second set features 64 cards with each card using both red and black ink. The checklists are similar but not the same in both sets. A total of 40 subjects are found in both sets but 24 subjects (a total of six per sheet) were changed from the double-ink color set to the set using only single-color printing. In all, there are the 40 subjects that did not change, 24 subjects unique to the double ink color set, and 24 subjects unique to the single ink color set for a total of 88 different subjects.

Fronts include athletes from a variety of sports, including baseball and football players but the interesting feature is in the design. In addition to the pictures of players, the fronts also have playing card numbers and suits like an actual deck of playing cards. Backs of the cards are blank. A handful of other subjects are also scattered to include tennis players, golfers, and boxers.

The baseball cards feature the players’ first and last names. A few exceptions have only some initials and a last name. And while baseball players are the ones most commonly bought and sold, don’t sleep on the others. The cards utilizing both red and black ink are significantly rarer and some athletes in that set are quite rare and valuable. The card for golfer Walter Hagen in that set, for example, can sell for $75-$100 (or even more) in decent condition.

How the cards were arranged/printed is also interesting.

Most strip cards were printed in single row strips where merchants could tear or cut individual cards for customers. These, however, were printed in 16-card sheets of four rows, each with four cards. Today, while these sheets are rare, they are out there. Each of the two 64-card sets is made up of four 16-card sheets. Thus, there are a total of eight different uncut sheets for the two sets.

Among baseball players are numerous stars – none bigger than New York Yankees greats Babe Ruth and Lou Gehrig. There are a lot of other key cards, however. Also included are Hall of Famers Mickey Cochrane, Jimmie Foxx, Goose Goslin, Lefty Grove, Rogers Hornsby, Walter Johnson, Al Simmons, and many others. The card of Foxx, in particular, is heavily desired as it is considered to be one of his rookie cards.

While the set is mostly a non-sports issue, it also includes some movie stars, such as Hoot Gibson, a Wild West actor and rodeo star. Other fringe athletes, such as aviators, are included, too. 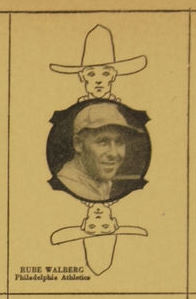 The set is almost always listed as a 1927 issue. That, however, is incorrect as pointed pointed out in this Net54 thread.

We know that because of a card for Philadelphia Phillies player Thomas Thevenow. Thevenow played with the St. Louis Cardinals in 1927 and 1928 and did not join the Phillies until mid-December of 1928. However, he is included in both sets as a member of the Phillies, meaning the cards would not likely have been issued until 1929 at the latest.

The set using both red and black ink on each card appears to have come first. Some of the cartoons on them, like the one on Gibson’s card depicting a cowboy, were used on cards for the replacements. Gibson’s cowboy card design was used for baseball player Rube Walberg in the single ink color set. That design would have been used first for Gibson (an actual cowboy) then kept the same for Walberg — not the other way around. But as Thevenow appears in both sets, any time difference in which they were printed was probably not significantly.

Here’s more on the two sets and the dating.