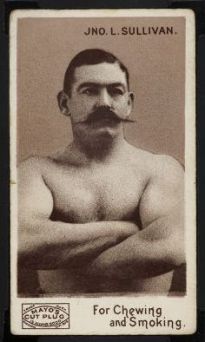 Printed in 1890, the Mayo Prizefighters set is one of the most sought after boxing issues of the 19th Century.

The cards feature the top boxers of the era. While no title is given to them on the cards, they were dubbed the Prizefighters set by Jefferson Burdick in the American Card Catalog as he cataloged them as N310.

The cards are distinctive with excellent imagery and the Mayo’s Cut Plug logo and advertisement in the lower border. Backs of the cards were blank. These are different from the popular 1895 N300 Mayo set released five years later as those cards had all black borders and black backs. The layout and design are similar but the boxing cards have white borders/backs instead of black ones.

One notable feature of this set is that, while there are 35 cards in the set, there are actually 70 different cards with variations. That is because each card has a variation with the boxer’s name both at the top and at the bottom. All cards are unnumbered.