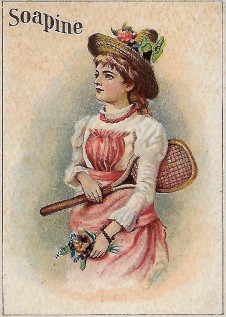 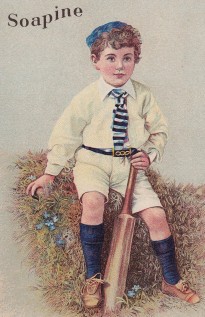 These trade cards were distributed by a soap substitute maker, the Kendall Manufacturing Company. The fronts depicted children and young adults inside of a thin black border. Most are non-sports cards but one in the set features a woman with a tennis racket, making that one a little desirable to collectors.

The cards were made to advertise the product Soapine. Many types of trade cards exist with the Soapine brand name but this set has a uniform design with the Soapine name printed in a wavy manner. Thus, I have cataloged this set as the wavy name. Note that another type of Soapine cards also has the name presented in a wavy manner. However, those cards have an olive green background and are part of a different set. These cards all have white or light-colored backgrounds.

Backs of the cards all have the same layout – a horizontal advertisement stating that Soapine is quicker, easier, cheaper, and better than soap. The product’s maker, Kendall, was established in 1827 in Rhode Island. The product was said to be for sale by all grocers.

There are two types of these sets. Some cards mention the lithographer, George Schlegel, based out of New York and others do not. The font and exact print of the advertisement on the backs also varies. In addition, I have seen two different sizes of these cards. One is approximately 2 1/2″ x 4 1/4″ and a second is approximately 3 3/4″ x 5 1/2″.

While the advertisements for these specific sets were horizontal, the pictures on the front were vertical.

Collectors of sports cards should note that one card in the set is sometimes listed as a baseball set. Shown here, it features a boy with a bat and a ball. However, this should be recognized as a cricket card, as that is the type of bat he is holding. If you are looking for baseball issues, note that this is not a baseball card.

Similarly, a second card features a boy with oars over his shoulders. He is standing on a wooden plank or dock and appears to be wearing some type of uniform. This card is often sometimes cited as featuring a baseball player but it also is not a baseball issue.

A complete checklist of this set is not currently known. However, I have cataloged the known sports cards.