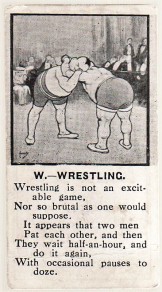 This unique set included various sports and pastimes on cards that were distributed by Monax Cigarettes by UK tobacco producer A&J Coudens in 1924. Coudens was busy in the early 1920s, issuing several other sets that were not related to sports.

The set is virtually the same as the 1925 Cope’s Sports and Pastimes set released a year later. It used mostly (if not entirely) the same images and featured the same sports for the same letters. A primary difference, of course, is the sponsor name. The Coudens/Monax names for this set are on the back whereas Cope’s printed theirs on the front. Additionally, the images in this set were black and white while Cope’s were in color.

The cards featured black and white cartoon images of unnamed, generic athletes on the front of cards. The interesting part of this release is that a card was printed for each letter of the alphabet. The alphabet was cut short by one, however, as only 25 cards were printed in the set (there is no ‘Z’ card).

Numerous sets were covered but cards for boxing, golf, tennis, and wrestling are key for many collectors. The boxing card, surprisingly, was not assigned the letter ‘B’. Instead, you’ll find it as the ‘U’ card for uppercut.

The cards are not entirely scarce but can be quite difficult to find, particularly in the U.S. These seem to be more scarce than the 1925 Cope’s counterpart.