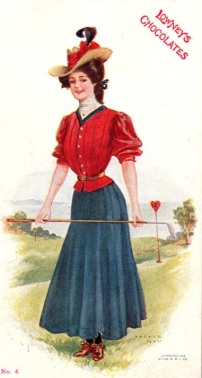 This unique set of six postcards was distributed by Lowney’s Chocolates. They are copyrighted by a company named W.M.L. Company, as indicated in the drawings. Artwork was performed by Archie Gunn, who produced art for many postcard sets.

Interestingly enough, while a postcard set, they were also classified as an E-Card by Jefferson Burdick in his American Card Catalog. Burdick gave the set a designation of E230, though it is clear that he probably didn’t know everything they included. We can deduce that by the name.

He calls it the College Girls set but the oddball set also includes Native Americans. in short, there are two cards of Native Americans, two of college graduates, and two featuring female golfers. The golfers, as you would expect, are generally the most popular cards in the set. The reason for the mismatched subjects is entirely a mystery.

The postcards included color artwork with the Lowney’s name in either red or blue. It is red on four of the six cards (golfers and Native Americans) and blue on the graduates. The postcards are numbered in the lower left corner and backs have a modest, undivided layout.

One interesting thing of note with regards to the postcard design is that it is a little different than traditional postcards. Measuring only 3″ wide and 5 1/2″ tall, that makes them a little narrower than most postcards.

These weren’t the only sports issue from Lowney’s. While mostly a non-sports set, a 1930s set from Lowney’s includes a pair of baseball cards.