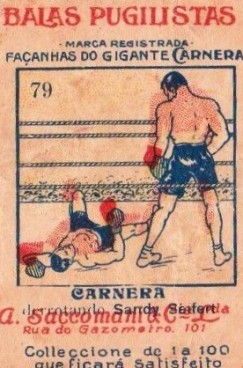 The cards are a low-quality grade and are often found with printing defects, miscuts, etc. They are a Brazilian boxing issue. The cards picture Carnera in a number of cartoon scenes and the text on them is in Portuguese. The name of the set is Balas Pugilistas, which, translated roughly is ‘Boxing Bullets.’

The cards are clearly Brazilian as they include the address of the distributor of them as Rua do Gazometro, a street in Brazil. The cards bear the name of A. Saccomani, which is believed to be a candy producer of some sort.

Carnera was an Italian fighter so the Brazilian origin may be a bit puzzling. However, Carnera participated in a Brazilian tour, including two fights, in 1935. The exact date of this set is unknown but I believe it could date to that year or perhaps the year before when they could have promoted his appearance. His first fight was on January 13, a knockout of Seal Harris. He then fought again only nine days later, knocking out Erwin Klausner.

Some of the cards in the set are puzzling. For example, this one here depicts Carnera knocking down a fighter named Sandy Seifert. However, I am not aware of the two fighting at any time. Some pictures also humorous, depicting Carnera as a bit of a superhero and overwhelming his opponents. One card (No. 34), for example, shows Carnera knocking his opponent several feet in the air and out of the ring entirely. Others depict his opponents as heavily beaten up to exaggerated states.

The set also contains numerous drawings of Carnera outside of the boxing ring. For example, one shows him as a soccer player. Others show him in non-sports capacities. Card depicting Carnera as a boxer will likely have the most desirability. However, the cards are also so rare that most boxing fans would settle for any of them.

Titles for the cards are those printed on them. They are printed following Carnera’s name in order to complete a short phrase (i.e. Carnera playing soccer). Please note that some typos almost certainly exist below.

For any that are sports-related cards aside from the boxing issues, I have identified those in parentheses.