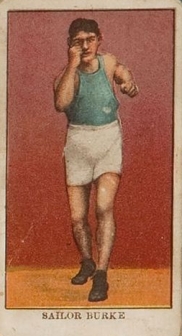 Like the incredible E75 American Caramel set, this issue is another small but star heavy set.

Cards feature color pictures on the front with the boxer’s name at the bottom. The white borders give it a similar look to other caramel cards of the era. Most cards have only one boxer but one features two – Sam Berger and James Jeffries. Counting that card, Jeffries is the only boxer to appear twice in the set.

The set was designated as E78 in the American Card Catalog but the producer is unknown (hence the Anonymous name). However, cards are believed to be the work of a candy company. Backs of the cards have the set checklist.

The issue is headlined in particular by Jack Johnson and, to a lesser degree, James Jeffries. But many other stars exist here, too. The cards are pretty rare and tougher than some other candy issues.