These miniature cards were offered in The Trading Post magazine and are classified as the Sports Exchange Miniatures set. Cataloged as W602 in the American Card Catalog, they were printed in 1947 in three different sets.

There are a total of 108 cards in the set but they were not all always apparently known to collectors. In the American Card Catalog, author Jefferson Burdick recognized only two types — red and green.

Each set contained 36 cards and the three can be distinguished by their border colors. Series 1 had green borders, Series 2 had red borders, and Series 3 had gold borders. Pictures of all three border types are shown here. Warren Spahn’s card has a red border, Honus (Hans) Wagner green, and Shoeless Joe Jackson gold.

Those three players also tells you quite a bit about this set in terms of the checklist. It was quite varied, including players across different areas. Some players, like Spahn, were current and others, like Wagner and Jackson, had stopped playing many years earlier. The set includes an absolute hodgepodge of stars.

The cards roughly measure 2 1/2″ by 3″ but those dimensions are only estimates as these cards were hand cut from sheets. Plus, the gold border cards were slightly larger at about 2 1/2″ x 3 1/8″. All were quite basic with a black and white picture and the player’s name on the front. Backs were blank.

Each sheet contained six cards, thus, each of the three 36-card series’ had a total of six sheets. These sheets were all numbered 1-6 for each series. 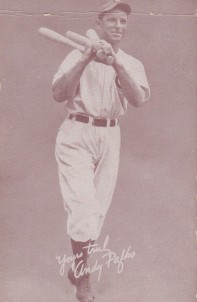 If some of the images in the set look familiar to you, that should not be much of a surprise. That is because several of the images were used in other common pre-war and early vintage sets.

Shown here, for example, is a Salutations Exhibit card of Andy Pafko next to a blown up version of his 1947 Sports Exchange Miniatures card (the postcard-sized Exhibit card on the left is obviously the larger of the two).

While the Sports Exchange Miniatures card is cropped it is easy to see that it is the same image as the one found on the exhibit card that was issued before that set.