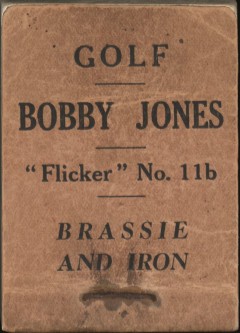 These books (called flip books mostly in the U.S. but flicker books in the UK) created miniature movies that could be viewed by flipping the pages quickly. Each image on the following page was slightly different from the previous one, showing the progression of a golf shot. These types of books were also popular here in the U.S. featuring other athletes in different sports.

These were printed in England featuring black and white images of Jones. They were produced by Flicker Productions, Ltd. and Harrod’s Ltd. Each book includes 100 miniature pages.

Because the books were intended to be thumbed through, they almost always exhibit solid wear, even if all of the pages are fully intact. It is common to find these with rusty staples, bent or creased pages, or even more substantial damage like tears or with pages missing.

These books are quite rare. Even in modest condition, they typically start at around $100-$150.

Of note is that Flicker Productions issued other books in other sports. Specifically, this listing states that others were produced for tennis, football (likely soccer), cricket, lacrosse, swimming, and greyhound racing.

At least three different types of these books seem to exist. However, I cannot determine if they were all printed at the same time or even by the same company.

Some of these books have the number 11 along with a corresponding letter (i.e. 11A) on the front and are titled only, ‘Golf Bobby Jones.’ A second type uses that format but without the alphanumeric combination. Finally, a third type is titled ‘Golf Shots by Bobby Jones’ and does not have a number on them.

In addition, some of these appear to include sponsor names of companies that likely distributed them to customers. similar to how trade cards were used. For example, I have seen one with the name of clothier Abercrombie & Fitch printed on it.

All are quite rare and I have not observed premiums being paid for any of the different types. And because of the rarity, it is difficult to conclude which are rarer. However, the first version with the printed alphanumeric combination seems to be the most common.

Some collectors may consider that book to be a part of this set. However, because it does not feature Jones, I have not listed it here. Additionally, and perhaps more importantly, that book is numbered 12 and not 11 as is the case with all three of these books. The book, however, does utilize the same format/layout as the Jones books.