1923 Union Jack Monarchs of the Ring Set and Checklist 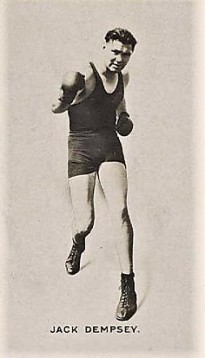 These cards were distributed by the Union Jack publication. They were issued weekly in January and February of 1923. The set, as mentioned on the back, is called, “Monarchs of the Ring.” This small set contains a total of only six cards. Four of the fighters featured are members of Boxing Halls of Fame.

This set includes some of the popular boxers of the era. The cards are basic with a black and white image of a boxer with only his name on the front.

Backs of the cards indicate they were offered with the Union Jack along with the date of issue. They also included a biography of the subject pictured as well as a card number.

The set is headlined by Hall of Fame legend Jack Dempsey. Dempsey has several slightly earlier issues but this is still one of his first cards.

The cards are somewhat difficult to find. That is because they were issued over a short period with each card being available with a 1923 issue of Union Jack. After the week was over, a new publication and card was offered.

tagged with 1923 Union Jack Monarchs of the Ring, Boxing, Publications