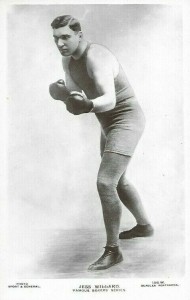 The 1920s J. Beagles and Company Famous Boxers set is one of the more popular pre-war boxing postcard issues.

The black and white set features, as the name indicates, famous boxers from around the world. Fronts include black and white images of the fighters while the boxer’s name, photo credit, and card number are at the bottom, along with the Famous Boxers Series indication. Backs have a simple divider line. Backs also include the J. Beagles and Company name, which was the company that published this unique set.

This set is commonly referred to as a 1920s issue, though I have seen these advertised as early as 1919. It includes many famous boxers, including Jack Johnson, Jack Dempsey, Georges Carpentier, and many more.

The postcards have a unique numbering system with each having a three-digit numeric number followed by a letter.

Today, the postcards are not impossible to find. But as they are a UK issue, they are not overly common here in the U.S. Commons typically start around $10-$15 for this set.

A full checklist of this set has not been determined.