One of the rarer and more unique 19th Century issues is this one produced by Duke Sons for its Honest Long Cut tobacco brand.

The set was produced in the late 1800s with most sources calling it an 1889 issue. It was cataloged as #125 (today, known as N125) by Jefferson Burdick in his American Card Catalog but little information is supplied. Burdick merely called the set ‘Puzzles’ in the Duke category, stated there were 15 in the set, and assigned a price per card to it of $.50. While that’s obviously next to nothing today, it’s definitely one of the pricier tobacco issues as most were below that.

The card are very unique in that a puzzle had to be solved. Duke encouraged people to collect the entire set as the answers to particular puzzles were found on the backs of other cards. The card are colorful and significantly larger than many of the smaller cigarette issues of that time. 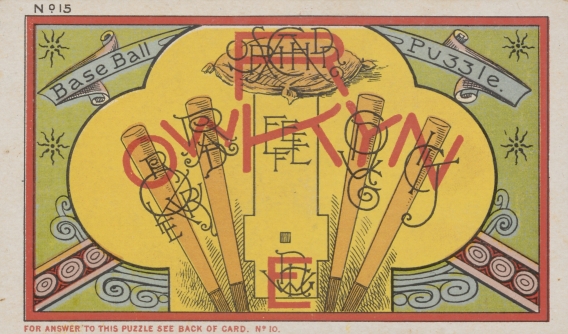 Most of the cards were not sports-related so this set often goes overlooked. But there is, in fact, a baseball card in it and it’s a great one.

Since this is a set of puzzles, the card doesn’t feature pictures of players or anything. However, it includes scrambled names of players written on top of one another, making it hard to read. As the back explains, the larger letter indicates the first letter in the person’s first or last name.

Finally, collectors then had to put all of the large letters together to form the name of a particular team.

The baseball puzzle card was No. 15 in the set while the answer to it was found on card No. 10. Pictured here is the front and back of the card.

Spoiler Alert: The baseball puzzle solved is below.

It should also be noted that the Giants were likely chosen as they were the league champions in 1889.

A total of 15 cards are found in the checklist but only one is sports-related – the baseball card outlined above. Others are all non-sports puzzles.