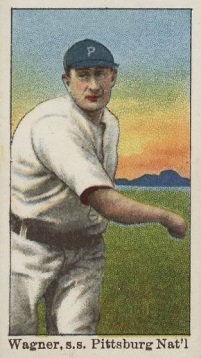 The 1909 E92 set actually contains four different releases representing Croft’s Candy, Croft’s Cocoa, Dockman and Sons, and Nadja Caramels. The same players and pictures on the cards were used on other E-Card issues, such as E101, E102, and E106.

The cards utilized the same pictures and players, but not all players were represented in all sets.

The E92 Nadja Caramels set had the biggest checklist with 62 players. Both Croft’s Candy and Croft’s Cocoa included 50 players, while Dockman included the fewest with 40. Each company/product had their own advertising back.

The same 50 players were used in both the Croft’s Candy and Croft’s Cocoa sets, so those two share the same checklist. However, those cards should not be considered to be equals even in the slightest as there is a significant difference between them.

The cards had your typical early candy/caramel card look. They included full color images with the player’s name, position, and team at the bottom. The cards also had a standard white border.

The sets have numerous big names but Ty Cobb, Honus Wagner, Christy Mathewson, and Cy Young are considered the headliners.

Dockman is the easiest back to obtain and is seemingly the most plentiful. For this reason, those cards are generally the most inexpensive. Because Dockman has the fewest cards, is the cheapest, and is the most plentiful, it is often the easy ‘go to’ for collectors wanting to complete an E92 set. Croft’s Candy and Nadja would be second in terms of easiest to obtain followed by the rare Croft’s Cocoa backs.

Adding to the confusion with the backs is that the Croft’s Candy backs can be found printed in red, blue, or black with black easily being the most plentiful. Croft’s Candy backs are not all that common, but when you do see them, chances are they will be printed in black ink. Ones printed in blue and red bring a premium and it should be noted that of all of the different back variations, the red Croft Candy cards are likely the toughest of all.

Below are pictures of the six different backs in the set:

Two possibilities for the stamps exist. First, they could have been merely the work of a young collector, who stamped his cards with that mark. Another possibility is that the game’s manufacturer could have used the cards as some sort of promotion and stamped them. The answer is not known but the stamp itself comes from that game.

Shown here is an example of the stamp (albeit on the back of an E97 card instead). The stamps are known on E92s and several other card types as well.