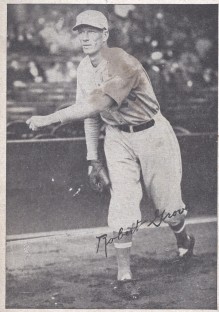 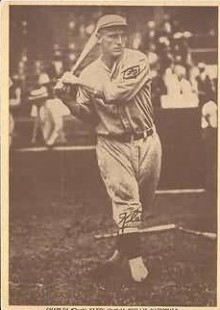 The W554 included large  photo cards with images of baseball stars. Fronts also included the players name, team, and position at the bottom as well as a replica signature. At 5″ x 7″, these are really more like miniature photos than they are baseball cards.

The set is headlined by Babe Ruth and Lou Gehrig but there’s much more here. In fact, more than 2/3 of the set is comprised of Hall of Famers. Other big names in the set are Jimmie Foxx, Mickey Cochrane, Mel Ott, and Lefty Grove, among others.

Many of the names on the cards are more formal than collectors will typically see. Cochrane, for example, is called by his first name of Gordon. Chuck Klein has the more formal name of Charles. Lefty Grove’s real first name of Robert is used. Same goes for Mel Ott, who is called Melvin.

Collectors may notice some of the pictures and find them familiar. Images from this set were also used in other sets, including the R316 Kashin, 1929 Leader Novelty, and the W553 strip card issues.

The cards can be found with blank backs or with advertising backs. Either type is difficult to find, but a premium is usually paid for cards with the ads on the reverse.

That advertisements are found on some of these photos is hardly shocking. Several other W-Card issues (W514, in particular) featured advertisements on the backs. Essentially, these were blank-backed card sets that didn’t belong to any particular company. Thus, they were used by many businesses, who added their own company name on the back to advertise a particular business or product.

And as I’ve written before, this is actually how the first Fleer baseball cards were created back in the 1920s.

A few different back advertisements on the W554 cards are known to date. Here’s more on the known W554 back ads.