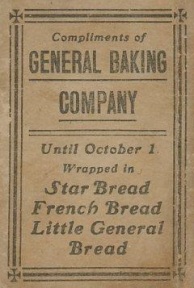 While the D304 set is generally characterized as the General Baking Company set, theirs are hardly the only advertising backs on this issue. In all, five backs, including General Baking, Brunners, Butter Krust, Martens Bakery, and Weber Bakery distributed these cards as well.

With regards to General Baking, they packaged these cards with their Star Bread, French Bread and Little General Bread products. The cards were available only for a limited time. The General Baking cards, for example, state that they could be found in those products until October 1st (a year is not specified). General Baking also produced the D303 cards with those same brands.

The fronts featured color lithographs of players and like other issues of the same era, had a white border with the player’s name printed at the bottom.

It should be noted that some cards in the D304 series have the team name blacked out. That was likely to denote players that changed teams during the time period the cards were printed. Their new teams are not printed but by blacking out the old teams, the cards were made a bit more current.

In terms of rarity, Weber Bakery, Butter Krust, and Martens are easily the most difficult to find. Brunners is by far the most common.

While 25 cards are known in the entire D304 series (combined, among the five different backs), all 25 cards below have not been found with a General Baking back. I have presented all 25 cards in the D304 series below since they could all theoretically have been printed with a General Baking back. To date, though, not all of these have been found with that advertisement.