1939 Senior Service Britain from the Air Set and Checklist 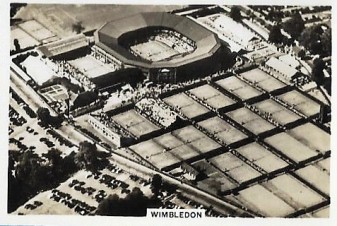 This set featured some of the more notable events and sights in London, England. It was distributed with UK cigarette brand Senior Service.

The cards are black and white and similar to several other issues around that same time period. The set is very similar, for example, to the 1935 Sights of London set and the 1936 Real Photographs of London issue. All three sets had the same layout.

Fronts of the cards also included a small caption. The cards featured aerial shots from the air, as indicated in the title. Backs include a description of the location or event pictured.

Most are non-sports cards but a few sports issues are found. One card features the iconic Wembley soccer stadium and another features Wimbledon, king of all tennis championships events. Wembley and Wimbledon were both included in each of those other aforementioned sets and the pictures are virtually the same, just at slightly different angles or with minor cropping.

The Wembley and Wimbledon cards are the only sports issues in this set.