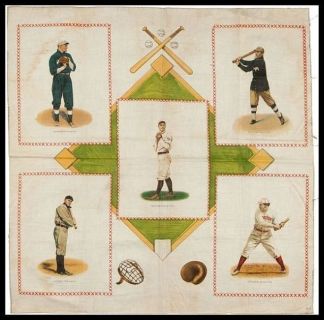 The S110 Pillow Tops/National Flags Premium set consisted of a total of 44 different topics. One of those was baseball and, to date, two different baseball designs have been discovered.

The pillow tops included five players on each one. On both, Christy Mathewson, Ty Cobb, Tris Speaker, and Home Run Baker were featured. The only difference is that Martin O’Toole is the fifth player on one of the pillow tops while Hall of Famer Walter Johnson is on the other.

Per this redemption coupon from Heritage Auctions, the Lorillard Company offered these pillow tops to consumers in exchange for 50 coupons. Also available were national flag designs. The pillow tops were approximately 2′ x 2′ while the flags were 7″ x 8 1/2″.

An example of each of the baseball designs was sold by the Mile High Card Company in 2012 and 2016.

The set also includes a basketball pillow top tied to the Hamilton King Girls series. Most of the women displayed on the pillow top are of the non-sports variety, but it also included a ‘Basket Ball Girl’ on it and utilized the same image in other Hamilton King series, including the S58 silks. You can see a picture of that one here.