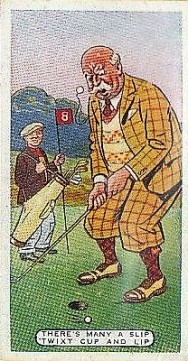 This set was based on humor and is called, “Figures of Speech.” The cards were produced by Ardath Tobacco Company, Ltd., presumably for their State Express and Ardath Cigarettes, which are mentioned on the back as their brands.

The cards feature colorful cartoon images of generally humorous scenarios. A caption is provided of a common figure of speech. The pictures and the correlation with the phrases vary. Some depict the phrase as if it were quite literal while others show a more accurate depiction of what the phrase is.

It is worth pointing out that some of the sayings are similar but slightly different than they are in America today. For example, one card uses the expression, “Hauled over the coals.” Typically, that phrase would be said as, “Raked over the coals,” at least in America.

Backs of the cards have a description of the phrase and photo shown as well as a card number and a mention that there are 50 cards in the set. While most of the cards are not sports-related, two are, as a boxing and golf card are featured.

Both the golf and boxing cards are shown here.The golf card shows a frustrated golfer after, seemingly, missing a short putt. The boxing card features a boxer that has been defeated and being hit with an umbrella by a spectator.