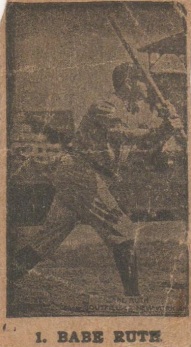 Babe Ruth is the only baseball player found in the set. He is, however, featured four times (three with card numbers and a fourth with no number) so it’s more of a baseball issue than it might seem. Several other celebrities are in the set more than once as well, so that distinction is not unique to him. Ruth’s cards are easily the most expensive. Even in low-grade condition, they usually top $500.

In addition to Ruth, one other major athlete in the set is boxer Jack Dempsey. Also here is Bill Edwards, a former football player and football coach, who is pictured with child star Jackie Coogan. That card can be classified as an early football card and it features the print ‘Bill Edwards (Football Star)’ as he carries Coogan. The card featuring Edwards is one of the few strip cards with a football player.

Many cards also do not have card numbers. Since at least some have numbered cards, it can be assumed that they were perhaps supposed to be numbered. Further confusing matters is that the same card number was issued for at least a few different personalities.

Finally, while some celebrities appear on multiple card numbers, the same pictures were used. Some, however, have slightly different fonts.

A complete W511 strip card checklist is not known. But in an effort to display one, I have listed the cards known or believed to be known here. It is possible that this set was skip numbered.

95 cards are known in the set but more than that technically exist in a theoretical master set considering the unnumbered variations and the color variations.