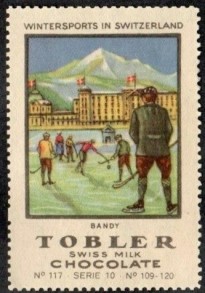 This multi-sport issue includes stamps featuring a variety of sports. Specifically, it is called Wintersports in Switzerland. At the top of the stamps, that name is printed or the other name, Vintrosporto en Suisia (translated to Wintersports in Switzerland), is featured. Ice hockey (rather, bandy, which was an early form of the sport) is the most popular sport in the set, but it also features others such as ice skating, skiing, curling, and sled riding. Notably, Tobler also produced a Summer Sports set in the same year.

One of the interesting things about the set is that I believe it was produced in two different languages — English and another unknown language.

The perforated stamps include the Tobler name and promote the company’s Swiss milk chocolate. They are noted as Series 10 in Tobler’s massive issue and the stamp numbers run from No. 109 – 120. And sticking with the company’s roots, a Swiss flag is featured on the ice hockey/bandy stamp.

Like many of the other Tobler stamps, these were printed in full sheets. They are clearly part of a larger series as card numbering starts at No. 109.