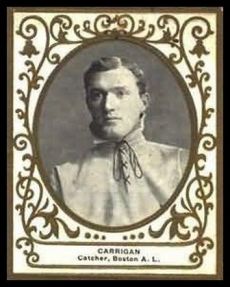 The T204 Ramly set is one of the most unique pre-war card issues. The cards are small, measuring nearly as a perfect square (2″ wide / 2 1/2″ tall). In terms of pure look and design, the cards varied greatly from the mostly elongated other tobacco and caramel cards from the same era.

The key card in the set is unquestionably the Walter Johnson. The Johnson card is considered to be somewhat of a rookie card. Johnson did have earlier issues, but they were either postcards or cabinet cards.

Fronts include a black and white portrait of a specific player inside of a gold, decorative frame. A gold border also outlines the entire front of the card and included at the bottom is the player’s name, position, and team.

One interesting development regarding the set is that an uncut sheet made its way into the hobby at some point. An old collector, Frank Nagy, owned this sheet that was eventually hand cut. Many of these cards were assigned high grades by SGC, who has since made the decision to label these cards on their slabs as being sheet cut.

The Ramly cards are extremely popular with pre-war cards, but more scarce than many issues and thus, more costly. Numerous spelling errors also exist in the set.

Backs include an advertisement for issuer, Ramly, and three different backs exist. – one for Ramly Turkish Cigarettes, one for T.T.T. Natural Turkish Backs, and a blank-backed card. Both of the ads mention the price (ten cigarettes for $.10) and the backs also included the factory where the cards were printed as well as the location.

Here are pictures of the three backs.

Almost all of the cards in the set feature pictures of players inside of an oval frame on the front with a gold decorative frame against a white background. However, a handful of players in the set have variations of this design.

Six players, John Anderson, Frank Bancroft, Kitty Bransfield, Jesse Burkett, Bill Dinneen, and Pat Moran, can be found with a different variation. These cards, instead, have a solid gold frame with no white background. The most distinctive feature aside from that is that the pictures of the players are inside of square frames instead of oval frames.