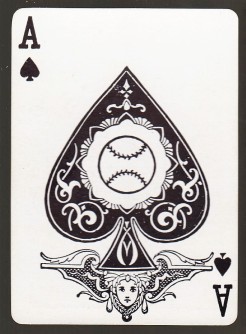 Similar to what you can find today, many pre-war playing card sets existed that had sports themes. This set was produced in 1914 and has a baseball theme.

However, unlike regular decks, this one was a little different. This is a deck of playing cards but it was designed to allow people to perform magic tricks.

While all of the playing cards feature standard clubs, diamonds, hearts, and spades, one of the cards is a special baseball edition. The Ace of spades card features a baseball on it, making that one a little more desirable. Others are merely standard playing cards with no baseballs.

The baseball backs of the cards were printed using only black ink. A series of baseballs are shown as well as two pitchers and a pair of baseball bats.

The cards have slight variances on the backs so that the person performing the tricks can identify the cards. The instructions that were distributed with the decks state that, ‘You can read them from the back as well as the front.’

The key to being able to perform the tricks is found by careful study of the backs.

The overall formula was pretty easy to figure out. In two of the corners (one at the top and one at the bottom so that they could be viewed no matter which way the card was held), a simple baseball design was printed. While barely noticeable, two of the baseballs in a given pattern would be larger than the others.

Using the placement of the larger baseballs and based on a pattern provided in the instructions, it could then be determined which card was held.

Once a person memorized the pattern, he/she could perform any number of tricks. The instructions provided with the game showed several examples of tricks that could be performed. 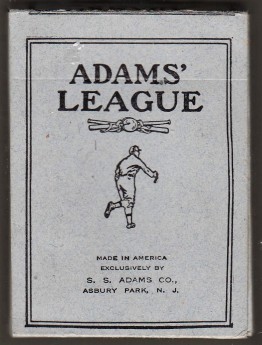 The cards were supplied in a simple box and at least three different types are known.

One features a baseball player fielding a ball. As stated on the box, the product was made in America through the S.S. Adams Company based in Asbury Park, New Jersey.

A second box is known as well that also bears the Adams’ League name but has a dark background, a different picture of another fielder, and no reference to the S.S. Adams Company.

A third box includes a picture of a fielder but with a white background and the S.S. Adams Company name included. That one also shows the Asbury Park, NJ location and is shown here.

Finally, a fourth box has red ink instead of black.

One side of the boxes showed the same pattern as was found on the backs of the cards inside. It is unknown if other boxes were printed but more may exist.

The cards were also seemingly packaged with another deck of cards called the Dollar Deck. This is known from an advertisement that states, “The two most wonderful decks of cards in the world,” with the Dollar Deck name as well as the Adams League cards.

That advertisement states the cards were copyrighted in 1914 by Mr. Theodore L. De Land of Philadelphia. Further, it appears as though the cards may have been produced with the idea of using them for card tricks. The advertisement continues that Mr. De Land is the greatest inventor of mechanical card tricks known as magic.

The set is a standard playing card deck with cards 2 through Ace in each of the four suits, clubs, diamonds, hearts, and spades, along with one Joker card.