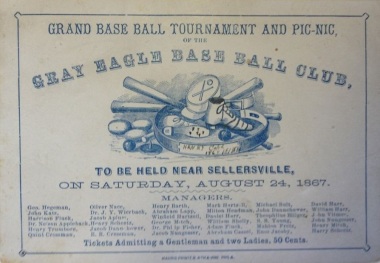 This unique trade card is one of the older known baseball cards in existence. While most baseball trade cards date back to the 1880s or late 1970s, a few older ones are known, including this one.

This card advertises an old baseball tournament and a picnic near Sellersville, Pennsylvania on August 24th, 1867. Sellersville is a small community in southeastern Pennsylvania.

Pictured is a cartoon image featuring equipment for all sorts of activities, including a pair of baseball bats. The card also lists the names of 36 managers, though the nature of their roles isn’t immediately clear. Tickets were sold for fifty cents, which, interestingly admitted a man and two women.

In 2013, REA auctioned off one of these cards, stating it was the only example they had ever seen. Safe to say, they are exceedingly rare.