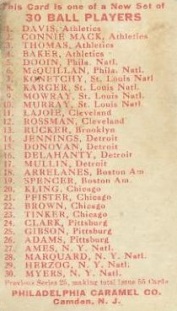 The 1909 E96 set was the second of two pre-war issues produced by Philadelphia Caramel with the popular E95 issue coming first in 1909.

The Philadelphia Caramel Company, as stated on the backs of the cards, was actually based out of Camden, New Jersey instead of Philadelphia, Pennsylvania. The company is most famous for the baseball cards they produced in 1909 and 1910. However, they also produced several other series of cards featuring a variety of subjects, including boxers, Native Americans, and dogs.

Like the E95 set, the E96 release was your standard, run-of-the-mill caramel card issue. Aside from the different players included, the main differences from the earlier E95 version was that the backs were printed in red ink and the checklist grew by five cards. Fronts included a color image of a player with his name and team name at the bottom. The backs included the full checklist, stating that the card was one of a set of ’30 Ball Players.’

One distinguishing feature between the two sets is that there aren’t any players featured in both. That makes collecting the two sets a bit more worthwhile since they include 55 different players. And because of that, it’s mostly seen as a combined issue of sorts. The E96 was a continuation of E95.

While both sets contain many stars, there’s no doubt that the E95 set has the bigger names with the trio of Honus Wagner, Ty Cobb, and Christy Mathewson. E96 is headlined by the likes of Connie Mack and Nap Lajoie.

The E96 set has a couple of unique cards.

First, it includes the aforementioned card of Philadelphia Athletics Hall of Fame Manager, Connie Mack. Mack doesn’t have a ton of cards but this is one of his more popular mainstream issues.

His playing days were long over but he became a world class manager. While Mack had won a few pennants before, 1910 was the beginning of his real success. It was the year he won his first World Series title and he would go on to win it all three times in four seasons. Mack also added two more World Series titles before his career was over and would manage until he was 87 years old.

His card in the set is a great one featuring him in a suit and tie. He was the only personality that was solely a manager to appear in either of the Philadelphia Caramel sets.

One other unique card in the set is that of Buck Herzog. Herzog’s card gets special notice here because it was the only horizontal image in either of the Philadelphia Caramel sets. All other cards were printed vertically.

Finally, a few errors are here. The cards of both Frank Arellanes and Jack Pfiester are misspelled. The most notable spelling error, however, goes to Hall of Famer Fred Clarke. Clarke’s name is misspelled ‘Clark.’

While both sets contain many stars, there’s no doubt that the E95 set has the much bigger names with the trio of Honus Wagner, Ty Cobb, and Christy Mathewson.

That’s primarily because the set sought the biggest stars in the first set. Since they didn’t duplicate players in the E96 issue, that left much fewer names to choose from. That was particularly troublesome because the E96 set was slightly larger.

Despite being a larger set, the E96 set has only eight Hall of Famers compared to ten in the smaller E95 release. Further, the quality of Hall of Famers in E96 isn’t nearly as powerful as the E95 lineup. To make up for that, E96 got a little creative with the insertion of Mack and the horizontal Herzog card.

One other feature of the E96 set is that they have some unique images.

Again, that could have been done in an effort to help offset the lack of star power in this issue compared to the E95 set.

First, there’s the card of Mack, which has him featured in a suit and tie, and the horizontal picture of Herzog. But several other player images are unique, too. There’s the aforementioned Fred Clarke card that shows him bunting. And the cards of Red Ames and Babe Adams are a little unique, too.

While the E95 set can boast the bigger names, it can be argued that the E96 issue has  artwork that is decidedly more interesting.

One final quirk related to the E95 and E96 Philadelphia Caramel cards is that copies of these cards were used on the covers of notebooks entitled, ‘Base Ball Series.’

Many of these cards were cut off of the notebook cover, essentially making hand cut cards. This led to a great deal of confusion in the hobby as they were sometimes incorrectly called scraps or even proofs. The cards use the same pictures and layout as the traditional E95 and E96 cards.

However, intact notebook covers have since been found, thus ending the mystery surrounding the cards. The cards, similar to other album cut cards for 19th Century issues, do have some value and are collected. However, they do not bring crazy money now that it is known what they are.

Below is a full checklist for the entire set.