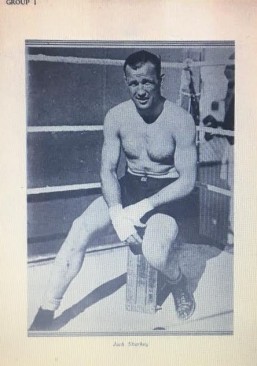 This set of boxing supplements is a bit unknown to the collecting community. But they were believed to have been issued by The Arena Publishing Company of Philadelphia. The company issued sports publications called The Arena in the 1920s and 1930s.

The mode of distribution for these is not clear. But they do appear to be linked to the publication as they are believed to have been shipped in envelopes bearing their address (2741 N. Palethorp Street in Philadelphia, PA).

These are not cards but are instead smaller photos measuring slightly larger 5″ x 7″ in size. Photos have a very thick white border with the fighter’s name printed at the bottom. An exact date for their distribution is not clear but they are believed to have been issued around 1930. These were printed on very thin paper as opposed to a thicker type of cardstock.

Part of the reason these supplements are linked to The Arena magazine is because some (if not all) were reprinted images that actually appeared in features in that publication.

Most of the photos include a Group 1 print on them but one with Group 3 print is also known, leading us to believe there are at least three ‘series.’ Based on the number of known Group 1 photos, however, it is believed that second and third series’ are probably smaller in terms of a checklist.

According to this Net54 post, this is the checklist of the set.