Old Maid is a popular children’s game involving matching pairs of cards. The game has been produced for more than 100 years as its popularity has continued throughout generations.

One older set believed to be have been produced around the 1920s actually included a baseball card. Character ‘Bill Homer’ is pictured batting while a baseball is being pitched by him. The card, like others in the set, is a humorous one. Homer is seen holding the bat awkwardly while standing on top of the plate.

The Homer cards are occasionally seen but are also somewhat difficult to find. Other non-sports issues are easier to obtain. 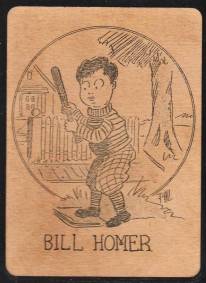 While the cards in the set are in color, black and white ones exist. These could be proof cards of a sort and, in addition to the one I own, I have only ever heard of one other (did not personally see it).

The black and white cards used the same images

It is not immediately known what the black and white cards were. They are harder to find and printed on a thinner stock.

I do not believe they were distributed as games like the color cards. Not only are they thinner but they do not have the game card green ink design on the back as is found on the color cards. Instead, the black and white cards are blank backed.

As stated, these could be some sort of proof cards. That is based not only on the scarcity but also the different backs. They could have been simply another distributed variation but I don’t believe that as other examples would surely have popped up. While many of the color cards show up, I have not seen black and white ones.

Note that each card has two cards in the entire set to represent the pairs needed to play the game. However, the Old Maid card has only one. In addition, an instructions card was included in the set.