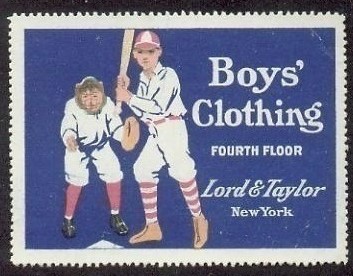 This stamp as used to advertise Lord and Taylor’s department store in New York. Specifically, it was used to bring attention to the company’s boys’ clothing section, which was listed as being on the fourth floor.

The stamp is interesting to collectors because it features an old baseball scene. Pictured are a batter and catcher against a blue background.

An exact or even estimated date of production is not known. This is believed to be a pre-war issue, however.

This is a standalone issue and not part of a known set.