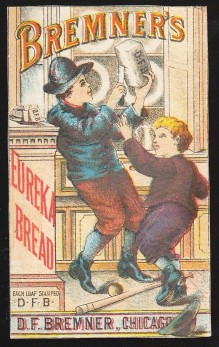 This was a trade card that promoted a bread brand.

The card served as an advertisement for D.F. Bremner company, which was the manufacturer of Eureka Bread in Chicago, Illinois. Two boys are pictured slicing a loaf of the bread from a Bremner’s location. The card is considered a baseball issue because at the feet of the boys is a baseball and baseball bat. The cards also indicate that each package of Eureka Bred contained a stamp with the initials D.F.B. (obviously, for D.F. Bremner).

Interestingly, the Bremner/Eureka trade cards I have seen do not include a border. It is possible that the ones I’ve viewed have merely been trimmed copies but they also may be borderless cards. While a bit unique, many other trade cards did not include borders.

Unlike other trade issues, these cards were specific to only one thing – Bremner’s and Eureka Bread. Backs of the cards include a commentary from Bremner’s with the maker, D.F. Bremner, describing the manufacturing of the bread.

The commentary reads as such:

In the manufacture of this bread I use only the best Minnesota Patent Flour, ground from wheat selected for this purpose. Milk from our own dairy farm, which is absolutely pure and full cream. The dough is mixed by machinery, constructed under my directions from my own designs, and every care is used to maintain for this bread the highest standard of excellence. To guard against the many imitations and insure (sp.) my patrons the genuine article, I stamp each loaf on top.

This is one of the tougher trade cards to find.