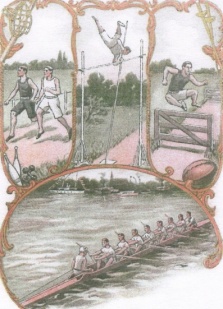 This was a trade card that featured a variety of sports.

The picture on the card depicted numerous athletes and various pieces of athletic equipment. With regards to the major sports, baseball equipment is pictured with a bat and a catcher’s mask. The case could be made that a football is also shown but I believe the ball pictured is for rugby, not American football.

In addition to the other sporting equipment, four sports are represented with athletes – a hurdler, a pole vaulter, runners, and a rowing team.