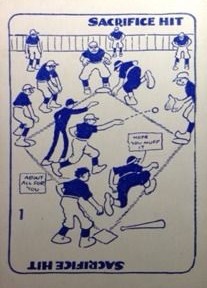 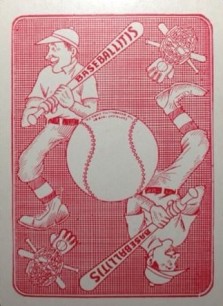 The 1909 Baseballitis Game included a deck of cards for players to simulate a baseball game.

The cards were packaged in a small box and without game pieces or a game board. The game was produced by the Baseballitis Card Company based in Milwaukee, Wisconsin.

The deck of cards did not include pictures or names of actual players. However, they did include a variety of baseball scenes printed in blue ink. The scenes are accompanied by the game actions that were used to play the game.

Backs of the cards featured a generic batter holding a bat with the Baseballitis name as well as a small icon of pieces of equipment, including a pair of bats, a catcher’s mask, and a glove.

As the cards have only printed game actions on them with baseball scenes, a checklist is not provided here.