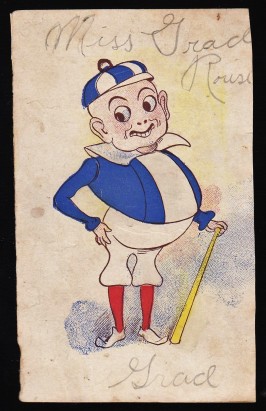 This was a trade card that mostly promoted Imperial Crown Perfumery Supplies.

But while it is often believed to only advertise that company, the image was not used exclusively to them. At least example of it being used on a booklet for painting and the H.P. Nelson piano company. It is unknown if it was used elsewhere.

Most examples seem to be for the Imperial Crown Perfumery Supplies company, although as the card is seen so infrequently, even that cannot be confirmed. But that company, as stated on the cards, was based out of St. Louis, Missouri and advertised various popular fragrances on ‘perfumery and toilet supplies.’

Pictured on the card is an odd baseball player with a blue and white uniform. His non-proportional body features a larger than average stomach and head with thin arms and legs. He is standing, holding onto a baseball bat.

While most trade cards were printed on thinner stock, these trade cards are exceptionally thin that feels more like a glossy paper. Because of that, they even a bit more fragile than your standard trade card.

While the card may have been used elsewhere, for the purposes of this site, I have kept the name as originally cataloged by Keetz.